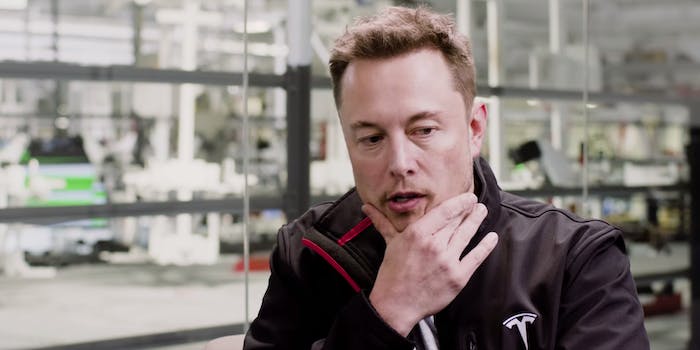 The automaker has until December to solve South Australia's energy crisis.

Elon Musk’s ambitious Twitter bet to create the world’s largest lithium-ion battery in 100 days has been given the green light. The Tesla and SpaceX CEO now has just three months to solve South Australia’s energy crisis.

Tesla announced the deal with South Australia in a blog post Thursday. The electric automaker was granted the entire energy storage system component for the regional project. Its goal will be to provide the state a sustainable renewable energy source using a record-breaking 100MW Powerpack system.

This will be the highest power battery system in the world by a factor of 3. Australia rocks!! https://t.co/c1DD7xtC90

The grid-scale energy storage solution will be installed at the Hornsdale Wind Farm near Jamestown, about 130 miles north of Adelaide. It will provide peak-hour energy to 30,000 homes in areas that were recently hit by electricity blackouts. Tesla says the giant battery farm will “solve power shortages, reduce intermittencies, and manage summertime peak load.”

Even more remarkable than creating the world’s largest battery is the timeline Tesla is giving itself. If the company can’t install and power the system in 100 days, it will do it all for free, losing $50 million or more in the process.

“We actually insisted in the contract that we’d be held to the 100 days or it’s free. It’s what we said publicly and that’s what we’re going to do,” Musk said during a press conference.

Musk is referring to a bet he made in March with Atlassian co-founder and billionaire Mike Cannon-Brookes. The two agreed that if Cannon-Brookes could come up with the money, Musk would solve South Australia’s energy crisis in 100 days or pay out of pocket.

If there is one guy you’d want to place your money on, it’s probably the man sending recycled rockets up to space while setting up a network of high-speed tunnels under California.