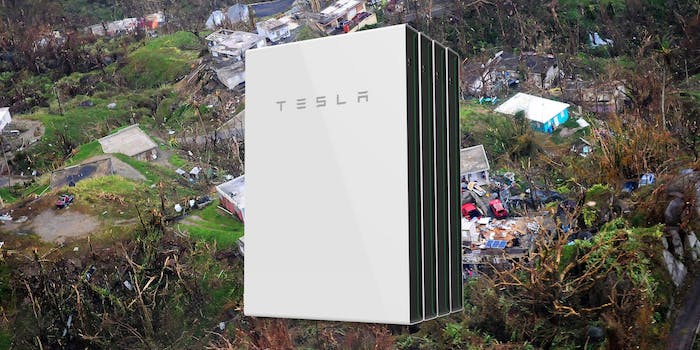 Elon Musk made it a priority.

Since Hurricane Maria struck Puerto Rico nearly seven months ago, the island has struggled to stay back on the power grid. While the Puerto Rican Electric Power Authority has to deal with repairs and restoring power to citizens, and citizens take matters into their own hands, Tesla Energy has also been helping out.

According to CEO Elon Musk, a couple hundred locations on the island using Tesla Energy storage systems were able to keep their power on during these blackouts.

An excavator reportedly caused the latest such blackout, which began at a major transmission line in the southeast of the island. The same company was responsible for last week’s power outage—when a tree fell on a key power line—last week. The company was clearing vegetation at the time; 870,000 residents were affected by that blackout, including many residents of Puerto Rico’s capital, San Juan.

Thus far, Puerto Ricans have lost 3.4 billion customer-hours of electricity. The power outage has become the world’s second-biggest blackout following the aftermath of Typhoon Haiyan, which struck the Philippines in 2013.

Tesla has been shipping Powerwalls and Powerpacks to the island of Puerto Rico since Hurricane Maria struck. Powerwalls are Tesla’s home energy solution, while Powerpacks are larger and more robust, designed for commercial and utility-scale entities. Places that have been using these products thus far include a hospital, a water pumping station, a sewage treatment plant, and an elderly community. Back in October, Tesla also outfitted a Puerto Rican hospital with a solar storage project, a combination solar array and Tesla Powerpacks.

Musk has made outfitting Puerto Rico with Tesla Energy solutions a priority even as its Model 3 production continues to experience serious delays and backlog. (Musk has blamed inefficient robots and automation for those particular issues.)

As for Puerto Rico, Tesla has thus far completed 662 projects, and others are currently underway.