Cutting costs? Cut down on ink.

Politicians always talk a big game about spending cuts and “cracking down on government waste,” but when it comes to actual ideas on that front, you might as well ask a teenager.

Suvir Mirchandani, a 14-year-old from Pittsburgh, was at first just trying to save his school some money (and complete a science fair project). He analyzed his teachers’ many handouts with a tool called APFill® Ink Coverage Software, trying to determine which fonts used the most ink—a pricey substance not often considered in budget-trimming.

He concluded that by exclusively printing documents in Garamond, which has slimmer strokes than Times New Roman or Century Gothic, the district “could reduce its ink consumption by 24%, and in turn save as much as $21,000 annually,” CNN reported. 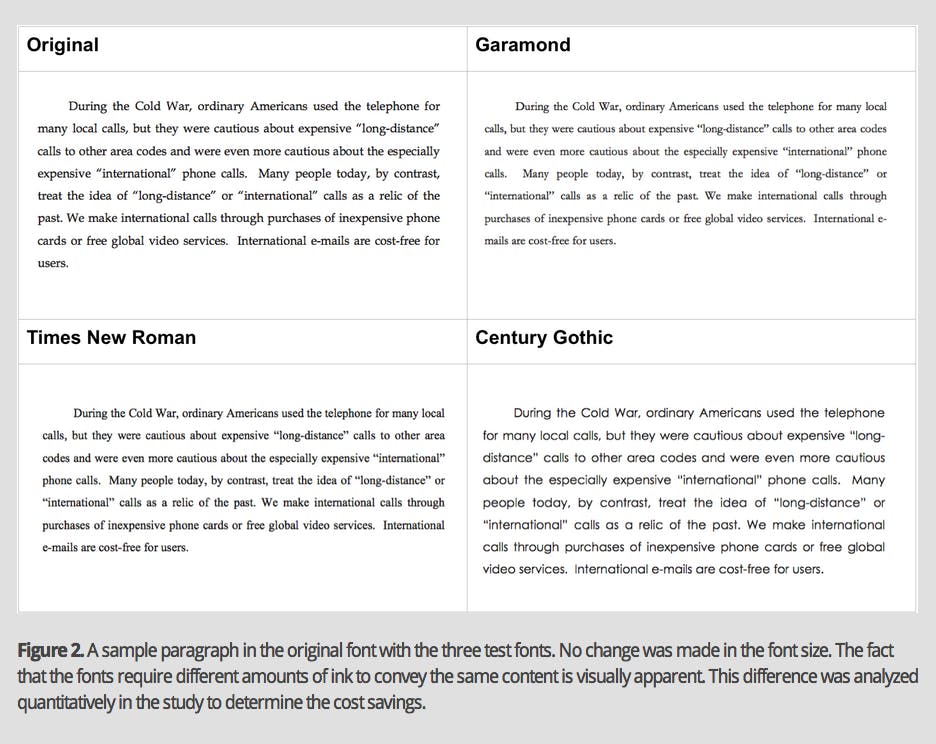 Impressed by his findings, Mirchandani’s teacher put him in touch with the Journal for Emerging Investigators, a publication founded by Harvard grad students in order to showcase the academic work of middle and high school students. Equally intrigued, JIE asked him to expand the scope of his original question to encompass the entire federal government, which burns through a staggering $1.8 billion per year on printing costs.

The resulting paper, “A Simple Printing Solution to Aid Deficit Reduction,” presents a seemingly airtight argument as to why Washington ought to adopt Garamond as its official/mandatory font. “Even though printing expenditure has been decreasing in recent years,” Mirchandani writes in his summary, “it continues to be high and a small percentage decrease in printing expenditure due to a font change could result in substantial monetary savings.”

How much money are we talking? “The analysis predicts that the Government’s annual savings by switching to Garamond are likely to be about $234 million with worst-case savings of $62 million and best-case savings of $394 million,” the paper states—and that doesn’t even begin to account for environmental benefits. This is just good business. 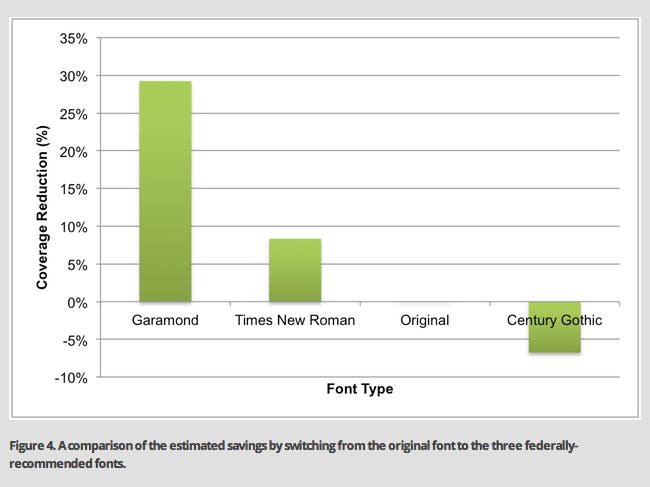 Though it sounds like a no-brainer, Mirchandani’s simple fix may not be embraced right away. Gary Somerset, media and public relations manager at the Government Printing Office, told CNN that they’re currently focused on using recycled paper and moving more content to the Web. The General Services Administration does have a “Printwise” initiative that aims to save $30 million by teaching offices “how to default their computer settings to Times New Roman, Garamond and Century Gothic”—Mirchandani notes, however, that this third federally-recommended font “is actually worse on average” in terms of ink waste.

But I think we all know the real reason the government is so resistant to this brilliant concept: too many senators and appointees are deep in the pocket of the shadowy organization known as NAPIM, the National Association of Printing Ink Manufacturers.

Clearly the masterminds of this cabal have a vested interest in seeing the U.S. rely on chunkier fonts and therefore buy printer ink cartridges more frequently. Are we going to sit back and let ourselves be fleeced? Because I would argue for direct intervention:

Update: Sure enough, some skeptics have emerged to rain on this parade—readers point to a debunking of sorts by Thomas Phinney, who notes, among other things, that the study incorrectly conflates toner with printer ink, fails to account for point-size differences between fonts, and would have us sacrifice legibility while saving considerably less money than hypothesized.