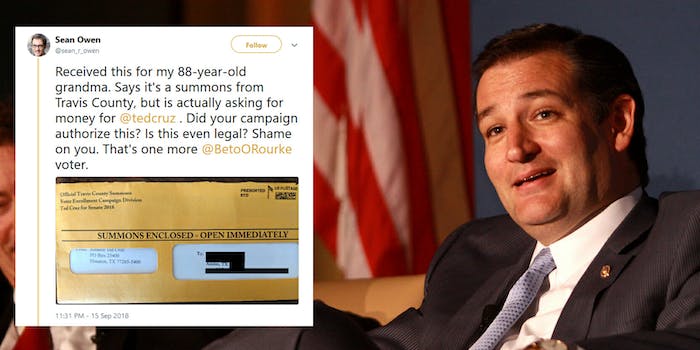 There were quite a few complaints about them online.

Sen. Ted Cruz‘s (R-Texas) reelection campaign reportedly sent out mailers to Texas voters that look like summons—a move that has been criticized online by supporters of his Democratic challenger Beto O’Rourke.

The race between Cruz and O’Rourke has become one of the most watched elections ahead of November’s midterms. As polls show the race becoming very close, there has been a number of mudslinging attacks by Cruz’s campaign and the Texas Republican party, including attacking the Democrat for cursing too much during public events.

The latest attention-grabbing moment in the race are the summons-style mailers sent by Cruz’s campaign, as Newsweek reports.

Twitter user @sean_r_owen posted a picture of the mailer–which says it is an “Official Travis County Summons” from the “Voter Enrollment Campaign Division” above a marker showing that it is from “Ted Cruz for Senate 2018.” Across the middle of the mailer, in large black letters, it reads in all-caps: “Summons Enclosed – Open Immediately.”

In a follow-up tweet, @sean_r_owen shows that the mailer shows that it is a “2018 Campaign Summons Form” that asks for a donation to the Senator’s reelection campaign.

Received this for my 88-year-old grandma. Says it's a summons from Travis County, but is actually asking for money for @tedcruz . Did your campaign authorize this? Is this even legal? Shame on you. That's one more @BetoORourke voter. pic.twitter.com/NcFoOCvjFj

This apparently isn’t the first time Cruz’s mailers have looked like summons forms.

PolitiFact examined the legality of using such mailers after the San Antonio Express-News wrote an editorial in late May that criticized their use. The fact-checking website found that such mailers are not in violation of Federal Election Commission rules as long as the mailers have disclaimers about who paid for them and are “clear and conspicuous.”

During Cruz’s 2016 presidential run, his campaign also sent out mailers to people in Iowa saying there was a “Voting Violation” that warned that people needed to attend caucuses to “improve” their voting “score” shown in a chart on the mailer, according to the New Yorker. Iowa’s secretary of state said in a statement at the time that the mailers “misrepresents the role of my office, and worse, misrepresents Iowa election law.”

As for the latest round of mailers ahead of the election against O’Rourke, Cruz’s campaign told Newsweek they had only received anecdotal complaints from people.

However, there were many complaints about the mailer online.

@tedcruz would expect nothing less from slimy Lyin’ Ted. Shame on you. Donating to @BetoORourke just because of this. This dirty trick will backfire on you spectacularly https://t.co/A5PVmRDep5

This should be illegal.
Shame on you @tedcruz
I will be voting for @BetoORourke & ask my fellow Texans to do the same! https://t.co/RdvQ9GYlJX

You can read all of Newsweek’s report here.