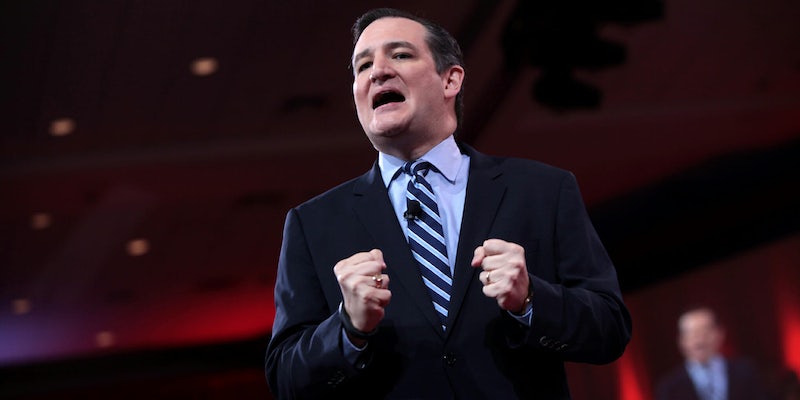 One senator called Nike 'anti-American' because of its decision.

Sen. Ted Cruz (R-Tx.) and other conservatives are voicing frustration that Nike pulled sneakers emblazoned with a Betsy Ross-era flag after being approached by former NFL quarterback Colin Kaepernick.

On Monday the Wall Street Journal reported that Nike took the themed Air Max 1 USA sneakers from retailers ahead of their scheduled release this week. According to the WSJ, Kaepernick reached out to the company that he and others felt the old 13-star flag was offensive because it was connected to an era of American history when slavery was commonplace.

“Nike has chosen not to release the Air Max 1 Quick Strike Fourth of July as it featured the old version of the American flag,” a Nike spokeswoman told the news outlet.

On Monday evening, Cruz commented on the shoe company’s decision, saying that it only wanted “to sell sneakers to people who hate the American flag.”

“It’s a good thing @Nike only wants to sell sneakers to people who hate the American flag…. @NFL #HappyFourth,” the Texas senator tweeted.

It’s a good thing @Nike only wants to sell sneakers to people who hate the American flag…. @NFL #HappyFourth https://t.co/G6w8vDjvLP

Similarly, Sen. Josh Hawley (R-Mo.) said Nike was “anti-American” in the wake of the decision.

“Nike thinks American flag is symbol of oppression? What planet are you on? Nike gladly allows Chinese Communist Party to tell it what products to sell while building its business around sweatshop labor. Nike is anti-American, pure & simple,” he tweeted on Tuesday. “Nike is a symbol of everything wrong with the corporate economy. They take advantage of our laws but send jobs overseas for sweatshop wages, partner w repressive regimes, aggressively avoid paying any US taxes, and then tell Americans to shut up and buy their stuff. Why do we put up with this?”

Nike thinks American flag is symbol of oppression? What planet are you on? Nike gladly allows Chinese Communist Party to tell it what products to sell while building its business around sweatshop labor. Nike is anti-American, pure & simple. https://t.co/AgHkCnVi33

In Arizona, Gov. Doug Ducey (R) ordered the state’s commerce authority to withdraw “all financial incentive dollars under their discretion that the State was providing for the company to locate here” in response to Nike’s decision.

Ducey’s announcement came as Nike planned to build a manufacturing facility near Phoenix. The facility would bring a little more than 500 jobs to the region, according to AZCentral.com. The city it’s building in agreed to waive nearly $1 million in review and permit fees and to reimburse the company $1 million for jobs that were to be created.