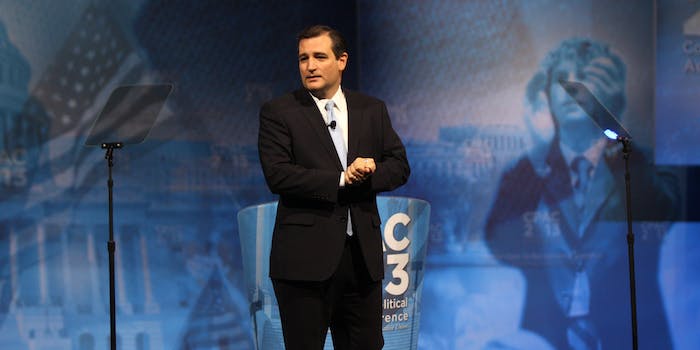 Ted Cruz: ‘Net neutrality is Obamacare for the Internet’

Conservatives have themselves a sweet deal with the Affordable Care Act, also known as Obamacare: They can criticize it in vague and usually inaccurate ways, and their base will eat it all up. But what’s a conservative to do when another issue begins dominating the news?

If you’re Senator Ted Cruz (R-Texas), the answer is simple: Link that thing—whatever it is!—to the dreaded Obamacare.

On Monday morning, President Obama announced his support for the Federal Communications Commission’s strong net neutrality option, Title II regulation. Reclassifying Internet service providers under Title II of the Communcations Act of 1934 would allow the FCC to treat broadband Internet service like a public utility, such as water, electricity, or landline phone serivce.

The president’s statement catapulted net neutrality into the headlines, at least for the moment, leaving conservatives like Cruz fumbling for a response.

Here’s what the esteemed Tea Party senator and likely 2016 presidential candidate finally came up with:

“Net Neutrality” is Obamacare for the Internet; the Internet should not operate at the speed of government.

Cruz wasn’t alone in making this obnoxiously facile argument, but his tweet certainly provoked the most response—which is just what he wants.

Ted Cruz: All things Obama supports are like Obamacare. Also, I don’t really know what net neutrality is. (Am I paraphrasing right?)

You keep using that word. I do not think it means what you think it means… MT @SenTedCruz “Net Neutrality” is Obamacare for the Internet

Obamacare fear-mongering: For when you absolutely, positively need to avoid making a substantive comment about a matter of critical national importance.