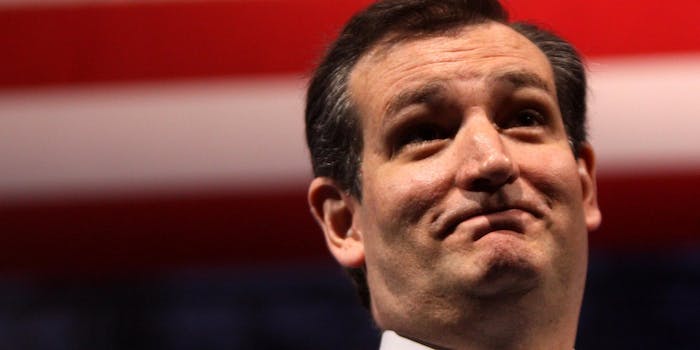 What college students are saying behind Ted Cruz’s back

Texas Sen. Ted Cruz told the world on Monday morning that he was running for president, surprising exactly no one. Cruz made the initial announcement on Twitter and then followed it up with a speech at Liberty University.

Making such a major announcement on a college campus might seem like a risky move for a conservative like Cruz, but Liberty University is no ordinary college. Founded by Rev. Jerry Falwell in the early 1970s, the school was recently listed as one of the top ten most conservative colleges in the country. The odds of Cruz’s announcement speech being interrupted by liberal protesters were about as low at Liberty as they would have been at CPAC, the annual conservative conference. Cruz’s choice of venue also allowed him to send social conservatives a message while visibly appealing to young people.

How Ted Cruz's speech is playing with Liberty U kids on Yik Yak pic.twitter.com/gh4xbmVsSU

Because Yik Yak lets anyone post anonymous messages that are geographically restricted, it has become incredibly popular among college students, who, as it turns out, like to say offensive or embarrassing things to and about each other when they know they can get away with it.

The Cruz campaign, the logo of which is either a teardrop containing the American flag or an American flag ensconced in a flame, is clearly off to a great start.

To the kids wearing #StandWithRand t-shirts at the Cruz presidential candidate announcement, you are awesome. pic.twitter.com/4bVqyzwsvJ