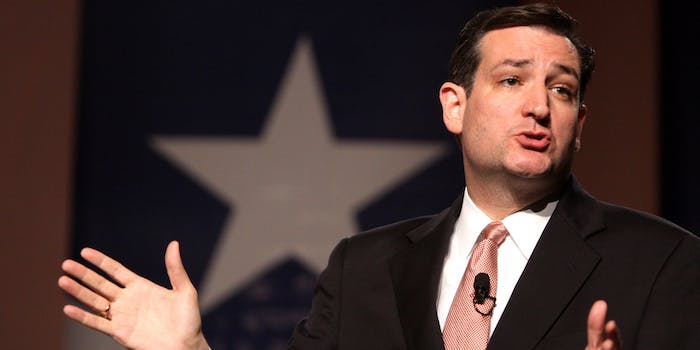 Somebody didn't get an important memo.

Texas Senator Ted Cruz thought he could count on support from a conference of Christians from the Middle East, but a remark about Israel proved to be his undoing.

While giving the keynote address at an event for In Defense of Christians (IDC), Cruz discussed “religious bigotry,” which he called “a cancer with many manifestations,” and promised to stand firm against intolerance of Judeo-Christian values.

But this implicit critique of Islam was not what set off the audience. Instead, the boos began when Cruz said, “Christians have no greater ally than Israel.”

“Members of the crowd began to yell ‘stop it’ and booed him,” according to The Daily Caller. The website posted a video of what happened next.

As the boos continued, so too, initially, did Cruz. “Those who hate Jews hate Christians,” he said, vainly trying to regain his momentum. “If those in this room will not recognize that, then my heart weeps.”

The Daily Caller talked to a “Middle East analyst” who explained the tension between Middle Eastern Christians and Israel’s policies. “Israel’s policies have led to demographic pressure that’s made the West Bank and Gaza far more Muslim than in 1948,” the analyst said.

At the IDC event, the audience’s response to Cruz reflected this tension. They continued to boo and shouted things like “Out, out, leave the stage!” and “Stop it, stop it, enough.” The president of IDC even emerged to try to calm them down.

At this point, Sen. Cruz—whose flair for the dramatic first came to national attention when he gave a 21-hour speech opposing Obamacare—decided to make a grand exit.

Cruz then fled stage-right. His allies on the right were quick to defend his comments and attack the audience.

Bad due diligence? What was Ted Cruz doing in that snake pit to begin with? Video of him getting booed off the stage. http://t.co/mpnEKqizF6

Ted Cruz is unafraid to speak the truth. To anyone. http://t.co/e2IkIJGqXQ

Ted Cruz spoke to a group tonight that booed him for expressing support for Jews in Israel. He’ll take that message anywhere, anytime