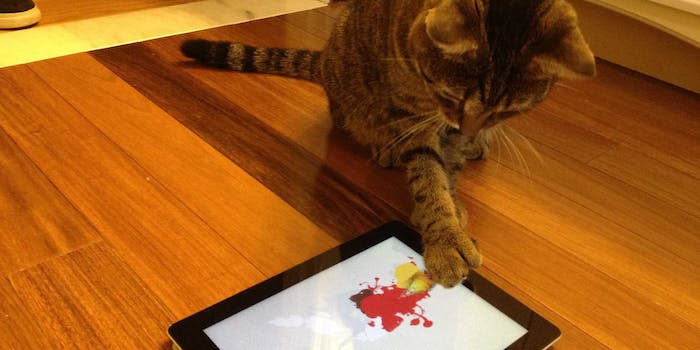 A serious guide to teaching your cat to use an iPad

Brought to you with assistance from Cinnamon, a cat.

The Internet and cat videos were made for each other. So when our feline friends begin to dabble in gadgets, it’s like the heavens are aligning.

From Pong clones to their very own cat-themed apps and games, our four-legged friends can enjoy touchscreen gadgets as much as we do. In fact, my original iPad has been a cat toy since the day I bought it. I’m not alone: There’s an entire community of amateur trainers out there who want to teach you how to turn your cat into a true iPad pro. So grab your kitty, a bag of treats, and your iPad, because class is in session!

You want to give your cat the best chance of enjoying what’s about to happen, so it’s important to prepare ahead of time. Cats have sharp eyes, but they’re also likely to ignore anything that doesn’t immediately capture their interest. Maximize the brightness level of your tablet screen and turn the volume up high. 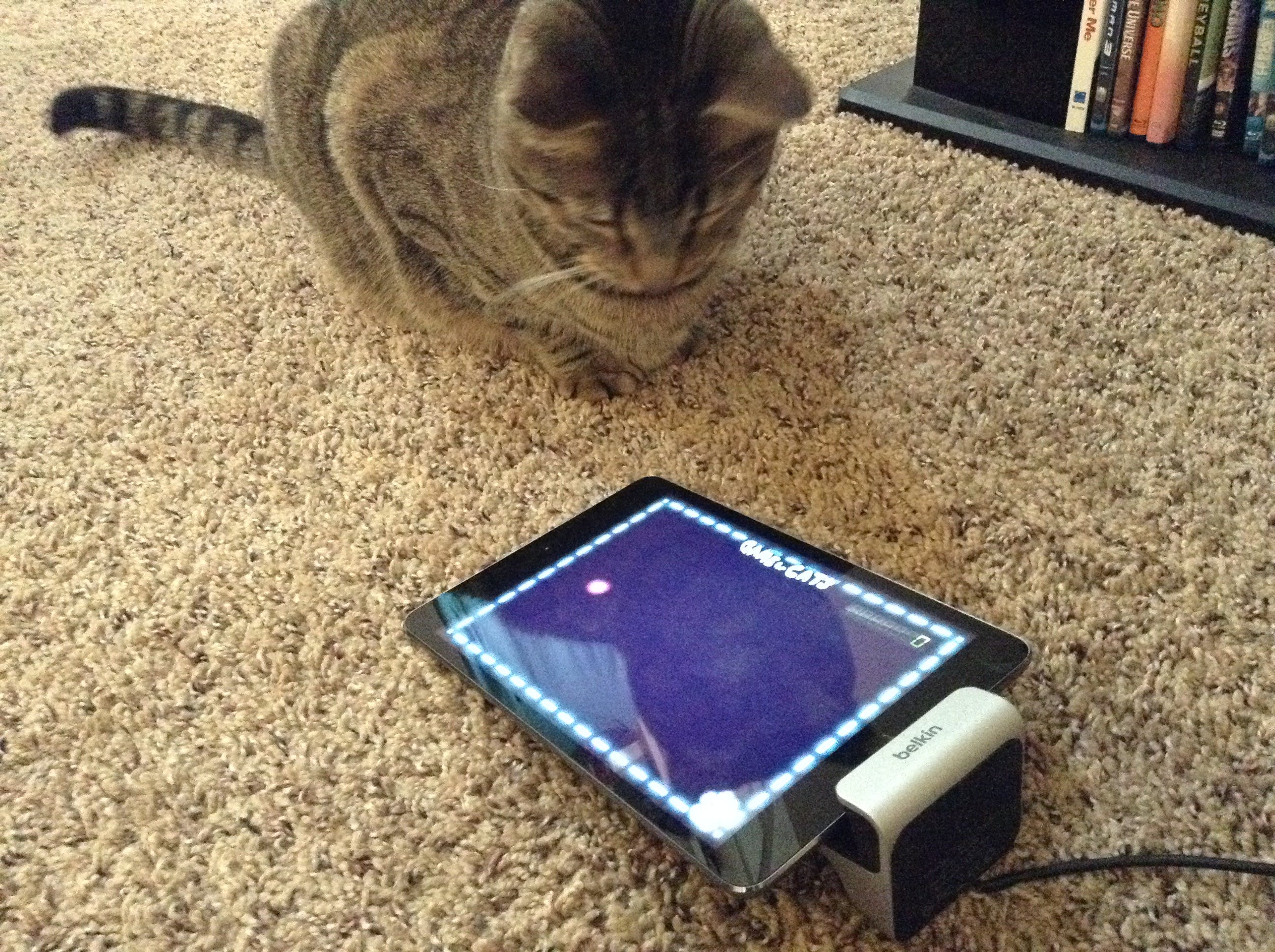 Make sure the screen is clean and free of debris that will distract or hinder the experience, and feel free to check your kitty’s paws for bits of litter or other dirt that could scratch up the screen. Lastly, pick a play area that is open and familiar so that the only item of interest is the tablet. No distractions!

Cats are naturally curious, but they’re also extremely careful when it comes to anything new. Before actually starting an app, just set your tablet next to your cat and let them sniff, touch, and generally get used to its presence. They need to know that it’s not a threat before they’ll be willing to let loose.

Once the initial skepticism passes, turn on the screen and start up an app that has some nice movement and color. There are a ton of apps made specifically for cats (we’ll get to some of those in a minute), so you’ll have plenty of choices. Don’t expect them to instantly start tapping away at the screen. If they do, that’s great. Maybe your pet is just naturally good at this, but all you really want to do is let your little friend take in the sights and sounds of the tablet before pushing them to do more.

Believe it or not, your cat pays pretty close attention to what you do, especially when it comes to something that is fresh and new. Showing them that it’s OK to touch the screen—and that a noise or eye-catching animation may result from that touch—can be as simple as touching it yourself. Play around with the app and make it clear that you are allowing them to do it, too.

Treats can help in this situation, as the offering of a treat will get them even more interested and provide a little extra stimulation. Whatever you do, don’t force your cat to touch the screen in an aggressive manner. If the tablet is laying flat on the ground, setting them on top may help, but never grab your cat’s paw and forcibly tap at the screen. That’s a recipe for disaster, and they’re likely to recoil and refuse to do much else.

If you’ve never search the App Store for cat apps, you’re probably going to be rather surprised at the selection. Companies like Friskies have even gotten in on the game with some free apps of their own, and most of the options you’ll come across are based on the fact that fast movement captures the attention of felines. Here are some of my cat Cinnamon’s own personal recommendations:

Game for Cats (free): Generic name? Yes, but this laser pointer simulator is one of Cinnamon’s favorite games. The movement of the bright red dot very closely matches that of a real laser pointer with jerky movements, stops, starts, and lots of motion.

Cat Fishing 2 (free): The classic cat game returns with a better design, and it’s still one of the best at keeping Cinnamon interested. Curiously, he doesn’t seem too fond of the random cat meows that the app produces, so we usually play this one with the sound off.

Paint for Cats ($1.99): Tricking your cats into creating a work of art is probably one of the most satisfying things you can do as a pet owner.

Friskies Jitterbug (free): Cinnamon is all about squashing bugs, and this app lets him live out those murderous fantasies without covering your place in dead insects. Be sure to try the “Endless” mode, as the round-based version of the game seems too buggy—no pun intended. 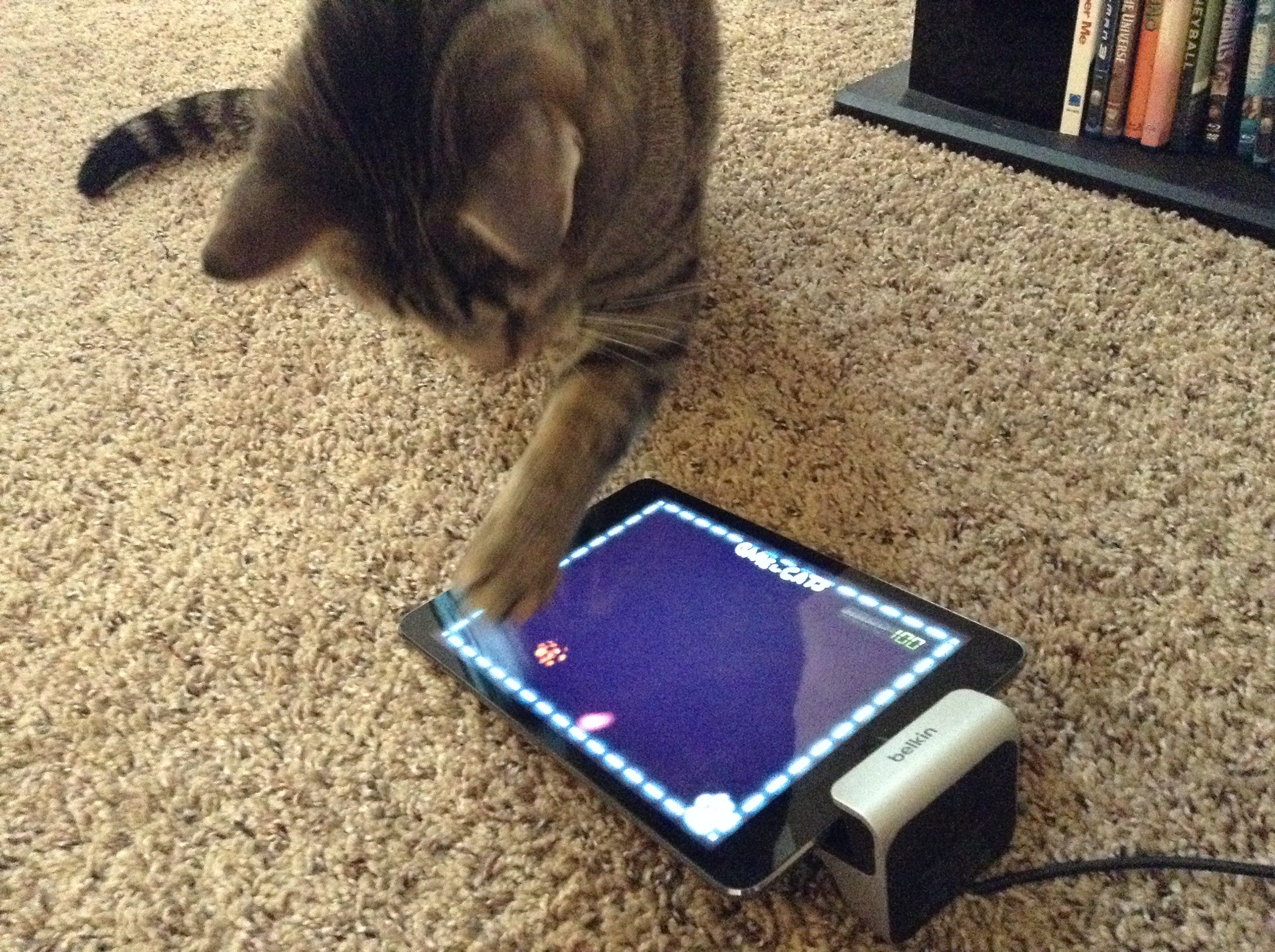 Cinnamon shows us how it’s done.

This is a time-tested pet training technique, and it revolves around sound queues and positive reinforcement. When your cat does what you want he or she to do, they are rewarded with a treat and presented with a specific sound simultaneously. Soon, your cat will associate playing on the tablet with the rewards, and your treat-giving can become more spaced out.

This is a great way to incentivize a specific activity and will be your best bet in getting a stubborn cat to warm up to tablet playtime.

Depending on your cat’s temperament, you may need to try several different apps over the course of a few training sessions, and just like any other cat toy, there’s a chance your kitty just won’t be interested in tablets whatsoever. Either way, it’s important to keep trying and give your little buddy as many chances as it takes for them to enjoy it. Pretty soon you’ll be able to record videos just like these.