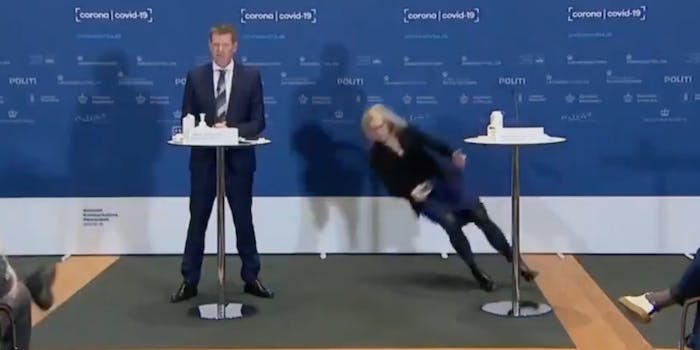 Anti-vaxxers are already blaming everything from immunizations to Bill Gates.

Denmark’s top health official fainted during a press conference on the coronavirus this week, spurring a torrent of conspiracy theories online.

Tanja Erichsen, the head of Denmark’s Medicines Agency, was witnessed collapsing as announcements were being made on the nation’s plan to halt the use of the Oxford-AstraZeneca COVID-19 vaccine.

Erichsen can be seen falling over sideways before striking the ground. Three individuals immediately rush to her side and begin giving her aid.

The health official was taken to the hospital as a precautionary measure and is said to have recovered.

The decision to pull the vaccine was made after two people in Denmark experienced blood clots, including a 60-year-old woman who later died. Although statistics show such complications are extremely rare given that millions have received the vaccine without issue, some countries have opted to halt its use.

While it’s unclear what exactly caused Erichsen to faint, conspiracy theorists immediately latched onto the incident to blame vaccinations.

“I bet you she got the vaccine…” @flowmindsets said.

Others blamed billionaire Bill Gates, a vocal vaccine proponent who has long been the target of conspiracy theorists online.

But others, mostly those who have served in the military, argued that it appeared as if Erichsen had made the mistake of locking her knees, which can restrict blood flow and result in fainting.

“Day 1 of military life. Don’t lock out your knees when standing for lengthy amounts of time,” @MaddMike41 said.

In reality, it remains unclear what caused Erichsen to faint. But no evidence whatsoever suggests that the collapse was connected to a COVID vaccine.