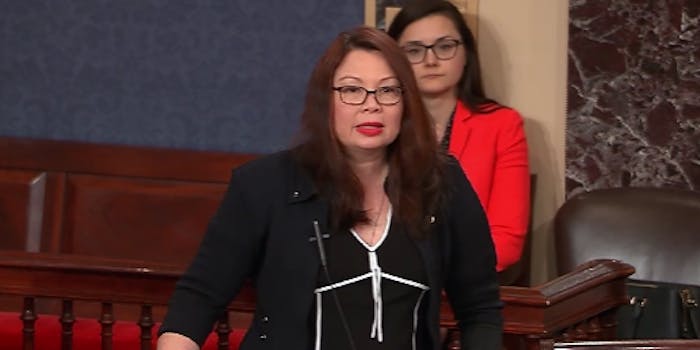 She refused to be lectured.

Sen. Tammy Duckworth took a heavy rhetorical swipe at President Donald Trump on the floor of the U.S. Senate on Saturday, derisively referring to him as “Cadet Bone Spurs,” a reference to the medical excuse that kept him from being drafted into the Vietnam War. Duckworth, 49, is a retired U.S. Army lieutenant colonel and a combat veteran of the Iraq war. A pilot, the Democratic senator from Illinois lost both her legs when her helicopter was struck by a rocket-propelled grenade.

Trump, on the other hand, received five draft deferments that kept him out of the long, bloody Vietnam conflict, four of which were given because he was attending college and the fifth because of a diagnosis of bone spurs in his feet. He has never served in the military in any capacity.

Duckworth, as the Hill detailed on Saturday, delivered the stinging remarks on the Senate floor, saying she “would not be lectured” about the military by Trump.

“I spent my entire adult life looking out for the well-being, the training, the equipping of the troops for whom I was responsible,” Duckworth said. “Sadly, this is something the current occupant of the Oval Office does not seem to care to do. And I will not be lectured about what our military needs by a five-deferment draft dodger.”

“And I have a message for Cadet Bone Spurs,” she continued. “If you cared about our military, you’d stop baiting [North Korean leader] Kim Jong-un into a war that could put 85,000 American troops and millions of innocent civilians in danger.”

I will not be lectured about what our military needs by a five-deferment draft dodger. https://t.co/gR3EbhGxBs

Duckworth’s staff also tweeted out that same statement―”I will not be lectured about what our military needs by a five-deferment draft-dodger”―in response to a tweet from Trump, which accused Democrats of hurting the military by refusing to cede to his anti-immigration policy demands in order to end the government shutdown.

Trump is far from the first president to be accused of draft-dodging. Former President Bill Clinton was attacked over his not having served in the Vietnam War, as the Republicans attempted to turn it into a major campaign issue. Ultimately, however, the attacks proved to have little traction, as Clinton defeated George H.W. Bush and Bob Dole, both of whom had robust records of military service.