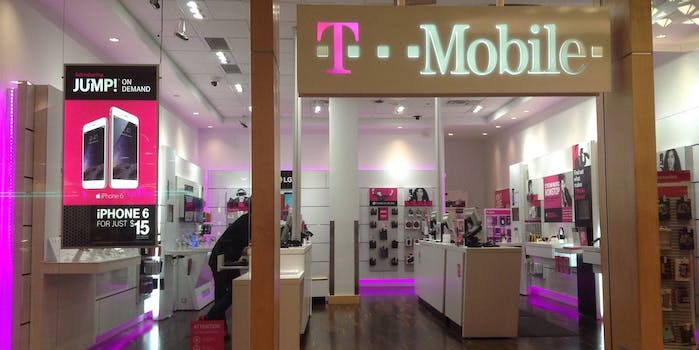 You won't catch extra fees when you catch 'em all.

Pokémon Go has been eating away at people’s free time, phone battery, privacy, and mobile data, but T-Mobile subscribers are able to get some relief; the mobile carrier is giving its customers a full year of free data for Pokémon Go.

T-Mobile is launching a selection of Poké-centric promotions for its subscribers that will be available through the T-Mobile Tuesdays app. The biggest catch for Pokémon trainers on the T-Mobile network will be unlimited data for the game—meaning any game time logged won’t count against a customer’s monthly data allotment—valid through August 2017.

In addition to the free data for the ongoing hunt for rare Pokémon, T-Mobile is also giving free Lyft rides for trips up to $15 to get to far away gyms, 50 percent off on accessories like battery packs to extend hunts, and a free frosty from Wendy’s because ice cream.

T-Mobile is also giving 250 people $100 to spend on PokéCoins and five people trips for them and a guest to anywhere in the United States.

Subscribers to T-Mobile will be able to begin claiming the free data and all the other offers (but let’s be real, it’s mostly the unlimited data that people are after) starting Tuesday, July 19, 2016. The offer will be available every Tuesday through August 9, 2016. Once claimed, the user will receive unlimited Pokémon Go data for a full year.

T-Mobile Tuesdays, launched earlier this year, is the company’s effort to give its customers offers and bonuses on a weekly basis. The promotion also offered a free share of T-Mobile stock to subscribers.

Pokémon Go has become a huge viral sensation for Nintendo and game developer Niantic. According to a report from SurveyMonkey, the game is the largest mobile game in U.S. history, amassing over 21 million daily active users.