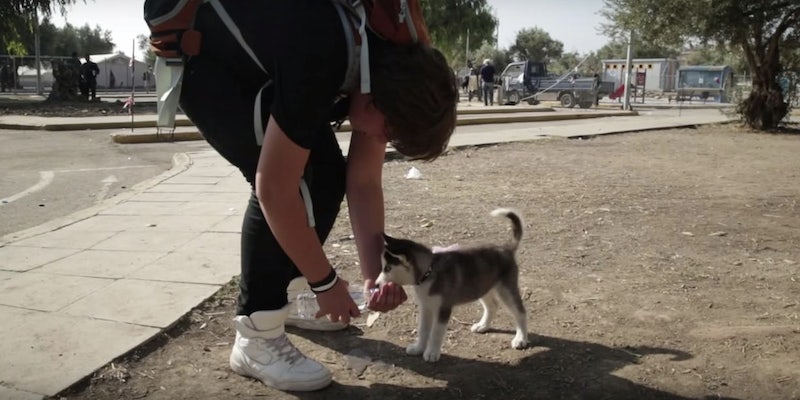 Sometimes it takes one story to make a tragic narrative relatable.

A 17-year-old refugee and his puppy are validating an age-old aphorism: there is no greater love than the love between a boy and his dog.

Aslan Al Hakim arrived in Greece after leaving his poverty-stricken home in Damascus, Syria’s capital, which remains under the control of President Bashar al-Assad’s government. During a run-in with photographers last week, Aslan showed off his best friend, a puppy named Rose, who had joined him on the 500-kilometer journey.

“I love this dog,” Aslan said, while sharing his water with Rose. “I need him.”

A United Nations worker recorded this video of Aslan and Rose a registration camp in Lesbos, Greece, where more than 1,500 refugees arrive daily. More than 200,000 refugees, many of them from Damascus and surrounding areas, have fled to Greece this year.

While mortars frequent hit the outskirts of Damascus, the center city has remained relatively safe, at least by Syrian standards. But four years of civil war have taken their toil on the city’s economy.

An influx of displaced citizens fleeing the fighting has resulted in a severe housing crisis, leaving many people homeless. The cost of food has skyrocketed and the limiting of gas subsidies has made life in Damascus unsustainable for many people, particularly the poor.

Life in the rebel-controlled suburbs of Damascus is an entirely different story, however. Hundreds of residents in areas like Douma and Darayya were killed this summer by Syrian military airstrikes. At least 110 people were killed on Aug. 16 when Syrian military planes bombed a crowded Douma marketplace.