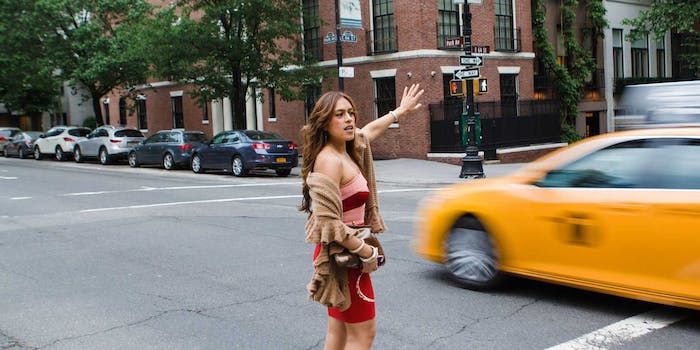 Swift is an Uber competitor built by ex-Uber drivers

A protest, in app form.

Abdoul Diallo has been driving with Uber for three years, and he’s been protesting the company for most of that time. He started the Uber Drivers Network in 2014 with the intention of getting the concerns of drivers addressed by the companies that contract their services.

“We started with the Uber Drivers Network because we wanted to protest against the price cuts, against the commission hikes, and you know just so many different policies that Uber was implementing against the drivers; deactivating drivers for petty reasons or having bad ratings—things that really sometimes made no sense whatsoever.”

Uber Drivers Network was an attempt to “come together as drivers, have one voice, and try to affect some changes.”

“One year after starting this organization, what we realized was that we have very little effect on Uber,” Diallo said. The Uber Drivers Network came to the conclusion that the companies they were driving for simply didn’t care about their concerns and problems. The relationship felt one-sided.

“We provide every single thing that has to do with the business. We buy the car, we provide the insurance, to all the other expenses of doing our job,” Diallo said, and despite their investment, Uber can cut them off from the platform at any time, simply because it provides the application to connect driver to rider.

“We do all the work, we cover all the expenses…Why not build our own?”

Enter Swift. Diallo’s platform is the “for drivers, by drivers” answer to the rideshare services that currently dominate the roadways. He said the application is built, and shared a demonstration of Swift in a video on the Uber Drivers Network Facebook page.

Diallo, who had a master’s degree in computer science, and some of his partners with experience in design and programming came together and crafted the blueprints for Swift, which was built by a developer firm that Diallo hired. “They knew exactly what we needed and knew exactly how to get it done.”

The goals for Swift are lofty to say the least. Diallo and his team are positioning Swift as an alternative that will do everything right that Uber gets wrong, though the specifics of the business itself are still sparse.

From the information Diallo could provide, Swift seems as though it will operate like a co-op, with drivers holding shares of the company and larger profit shares split between the drivers. “There are no big investors to make profits for,” he said. “This is ours. Whatever we make belongs to us.”

The focus will be on full-time drivers—the people who hope to make a living out of giving rides. That’s a minority of drivers for Uber, which reported in 2015 that 80 percent of its partners drove fewer than 35 hours a week. Most Uber drivers hold another full- or part-time job in addition to driving.

It’s hard to quantify how many of those drivers would switch to full-time employment behind the wheel if better opportunities were presented, but Diallo is banking on being able to pull those people over to his platform.

It’s easy to see, given the promises that Diallo is pitching, why drivers would jump shift to Swift. Many of them have been looking for alternatives, turning to competitors like Lyft and the yet-to-launch Juno, which promises bigger shares of fares for drivers and considerably smaller commissions for the company. But Diallo thinks Swift presents the best option for drivers, stating the competition is “all the same.”

“So far, it’s bad and worse. Lyft, Uber, all those guys, they’re all seen in the same boat as far as drivers are concerned. None of them have stepped up to the plate.” Diallo said the time for the big name alternatives have come and gone; they missed their chance to steal a sizable market share and failed to appeal sufficiently appeal to the people who do the driving. That is what Swift aims to do differently.

“What pains one Uber driver pains almost every single Uber driver on the planet,” Diallo explained. “Drivers all over the place are complaining about the same exact thing.”

According to Uber’s own internal data, it would seem as though the pain points aren’t present for most of its partners. 81 percent of drivers surveyed by Uber claimed they were satisfied with the company, though questions have been raised about just how accurate that figure is. It was a small sample size—833 out of over 400,000 active drivers—and many drivers expressed fear of retribution by Uber for those who provided negative feedback.

“No one in their right mind would answer this correctly if they weren’t happy [with] Uber for fear of being deactivated,” one driver wrote on popular ridesharing forum UberPeople.net.

An independent poll conducted by Harry Campbell, otherwise known as the Rideshare Guy, found that among 435 Uber and Lyft drivers surveyed, fewer than half were satisfied with the companies.

It’s hard to say which set of data more accurately reflects the whole of Uber drivers, as it is difficult to imagine that as fares and wages for drivers have dropped, satisfaction has increased, but both sets suggest there is some segment that is dissatisfied with the platform. So some drivers will likely come to Swift.

So, what about the passengers? Diallo is focusing on creating a better environment for drivers, operating under the premise that better, happier drivers will create a better experience for customers. While Uber’s business model is quantity, Swift’s will be quality.

However, customers are considerably less disgruntled when it comes to Uber’s service. All of the actions Uber takes that harm drivers in Diallo’s estimation also benefit consumers. Rates are lower, rides come quicker, and the service is ubiquitous with ridesharing.

The horror stories regarding safety has yet to deter most users from getting in Uber cars, and in turn Uber hasn’t made any changes; one needs to look no further than the company’s defiant and tone deaf conference call following an Uber driver murdering six people, in which it insisted that no background check would have prevented the event and no changes would be made to the company’s screening process.

In the long run, those issues may catch up to Uber as quality of the service erodes and may one day cause a big enough public outrage to force some changes. In the mean time, riders are as happy as ever. A survey conducted by Forum Research found Uber was gaining market share in Toronto, and 93 percent of those who had used Uber in the city said they were satisfied with the experience. In comparison, 52 percent said they were satisfied with their taxi experience.

Getting the riders to make the switch will be a major challenge for Swift. Diallo believes he is up for the challenge and is prepared to heavily market the app to attract as many people as possible. He’ll need to find riders as willing to make the switch as drivers; the business model it’s hoping to build is idealistic as is, but will fall apart quickly if there is no profit generated to share.

Swift doesn’t have an official launch day yet, though it is accepting signups. Diallo promises more details will come in regards to the the business side of things prior to release.

The service will start in New York, with cities like San Francisco, Los Angeles, and London waiting in the wings.