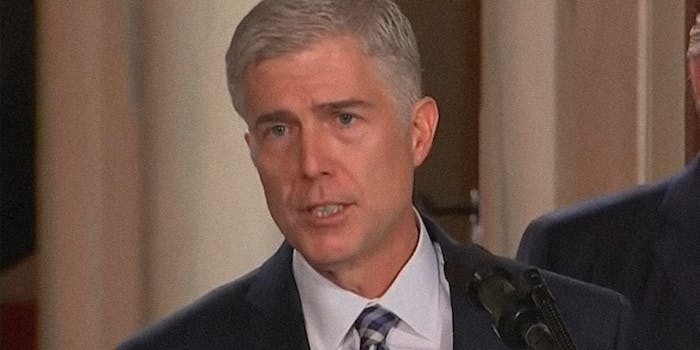 As the Senate showdown over President Donald Trump’s Supreme Court nominee Neil Gorsuch comes to a head and Republicans consider forcing him through, Sen. Bernie Sanders (I-Vt.) launched an impassioned 13-minute speech on the Senate floor explaining why he believed Gorsuch was not suited for the role.

“The Supreme Court is the most important judicial body in this country. The decisions that it reaches, even on a 5-4 vote, have a profound impact on all Americans, on our environment, and on our way of life,” Sanders said, before beginning a detailed deconstruction of Gorsuch’s past judgments.

Gorsuch is a traditional conservative and liberals, like Sanders, fear his nomination would lead to court decisions unfavorable to the LGBTQ community, abortion rights, and financial regulations.

“At a time of massive income and wealth inequality, when so many working people throughout this country feel powerless at the hands of the wealthy, and the powerful, and their employers, we need a Supreme Court justice who will protect workers’ rights and not just worrying about corporate profits,” he continued. “I fear very much that Judge Gorsuch is not that person.”

Described as the “nuclear option,” this drastic measure would change Senate procedure so that a decision could be passed by simple majority—doing away with the 60-vote threshold usually required for Supreme Court nominees. If Senate Majority Leader Mitch McConnell decides to press the button on this threat, it will impact future Supreme Court nominee votes.

When in power in 2011, former Senate Majority Leader Harry Reid (D-Nev) lowered the bar to 50 votes for all judges save Supreme Court nominees to circumvent possible Republican filibusters.

The filibuster and Republican response convey just how divided and partisan the Senate has become. Gorsuch is the first Supreme Court nominee in almost half a century to face a filibuster, with every other nominee in recent decades approved by a clear majority.

At 6:00pm CT on Tuesday, Sen. Jeff Merkley (D-Ore.) began a protest, as part of a filibuster, in which he plans to hold the Senate floor for as long as possible to prevent a vote. He has been using the time to advocate for bipartisan cooperation and outlining problems with the nomination. As of Wednesday morning, Merkley is still going.

McConnell could call for a vote on Senate rules as early as Thursday morning.

Update 9:24 am CT, April 5: Per the Associated Press, Merkley has ended his filibuster.