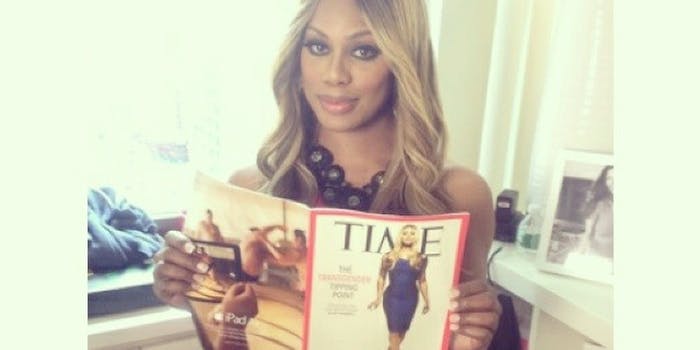 "The rest of us probably just call it transphobia."

The Chicago Sun-Times has syndicated a controversial transphobic opinion piece by Kevin Williamson, a former deputy managing editor of the conservative National Review.

Williamson attacks noted transgender woman Laverne Cox, who recently made the cover of Time magazine, in a piece headlined, “Laverne Cox is not a woman,” blaming her and the transgender movement for encouraging “unreality.”

Williamson blames the transgender rights movement’s “ever-shifting” definitions of what transgender identity is for the claims that Laverne Cox is the “first” transgender woman on the cover of Time. Williamson points out that Chelsea Manning was also on the Time cover, though her cover was shared with Edward Snowden and Aaron Swartz, and appeared two months before she outed herself as fully transgender with a public request to be referred to as Chelsea.

Instead of acknowledging the right to privacy that responsible journalism tries to respect for trans individuals who have not yet fully outed themselves, Williamson takes the semantic difference to mean that transgender identity itself is equivalent to “the voodoo doll.”

“As I wrote at the time of the Manning announcement,” Williamson wrote, “Bradley Manning is not a woman. Neither is Laverne Cox.”

Williamson goes on to argue that transgender individuals are attempting to distort “reality” and legalize “treating delusion as fact.” He cites “the service of Eros” as a motivation, but fails to explain what Eros has to do with the incredibly high numbers of transgender individuals who are murdered, commit suicide, rendered homeless, face unemployment, and face hate crimes.

While the National Review is staunchly right-wing conservative, readers seemed deeply upset to see such an article in the Sun-Times. This is, after all, the paper that published liberal human rights champion Roger Ebert until his death.

Hey @Suntimes: publishing this deeply transphobic drivel is beneath even you. Retract and apologize. NOW. https://t.co/xG75vXuYVs

The paper’s Facebook page has likewise filled with angry reader reactions as word about the transphobic piece has spread. A representative comment from reader Jenni Spinner argues that the syndication holds no value for local Chicago readers:

After Kevin D Williamson’s hateful, disrespectul comment on Laverne Cox, I will not read, buy, subscribe, click, or otherwise support the Sun-Times. I realize it is a commentary, but it’s not even an original Chicago view–it’s repurposed from another publication–so it’s regurgitated garbage of no use or benefit to S-T readers. It is extremely offensive and completely ignorant of gender identity, and the S-T editorial board’s decision to publish under its own banner is questionable at best.

But this isn’t the first time the Sun-Times has come under fire for transphobic reporting. In 2010, the paper incited controversy for reportedly referring to murdered transgender Chicago woman Sandy Woulard as “a man dressed in woman’s clothing.”  This is the same super-imposed style of journalism that recently led to controversy over a article for ESPN’s Grantland, in which the transgender subject of the article committed suicide after Grantland moved forward with plans to out her as having been born biologically male, despite her own desperate objections.

Williamson would undoubtedly call that being true to reality. The rest of us probably just call it transphobia.

Update: After taking down the piece, Sun-Times Editorial Page Editor Tom McNamee issued an apology to GLAAD. McNamee said in a statement: “The column failed to acknowledge that the American Medical Association and the American Psychological Association have deemed transgender-related care medically necessary for transgender people. It failed as well to acknowledge the real and undeniable pain and discrimination felt by transgender people, who suffer from notably higher rates of depression and suicide. We have taken the post down and we apologize for the oversight.”