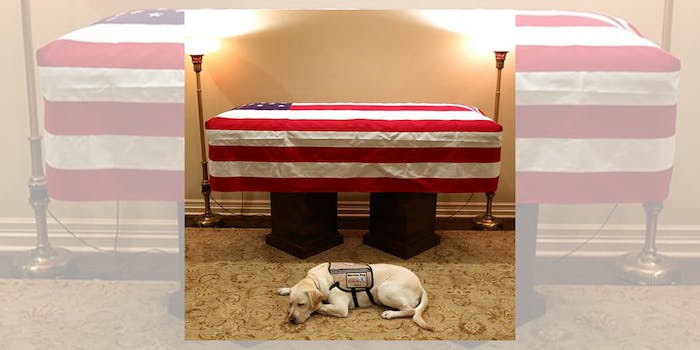 The picture is melting a lot of people's hearts.

Sully, the service dog for former President George H.W. Bush, was captured laying in front of his flag-covered casket—and many people could not contain their emotions about it.

Bush died on Friday at 94. Sully had been working with the former president since his wife, Barbara Bush, died in April.

Jim McGrath, a spokesperson for the family, tweeted out the photograph of Sully laying in front of the former president’s casket, writing “mission accomplished” and adding a hashtag, #Remembering41. The photo was also shared on the service dog’s Instagram account @sullyhwbush.

Even Jeb Bush, the son of the former president, was fond of Sully’s dedication to his father.

Sully has the watch. https://t.co/olnBtN4WgE

CNN reports that Sully will travel with Bush’s casket to Washington D.C.

After that, as former President George Bush wrote on Instagram, Sully will return to Walter Reed National Military Medical Center.

“As much as our family is going to miss this dog, we’re comforted to know he’ll bring the same joy to his new home, Walter Reed, that be brought to 41,” he wrote.

The photo struck a cord with a number of people online, prompting thousands to comment about their emotions they felt seeing the photo of Sully.

Sully has been George H.W. Bush’s service dog for the last couple months.

Even after his death, he was right at his side.

We do not deserve dogs. pic.twitter.com/w6QkU5fljP

Oh, Sully. What heartbreak for this pup. https://t.co/qjWm4GfvvL

The unconditional and selfless love of a dog. 😢 https://t.co/KEbPKHpPt0