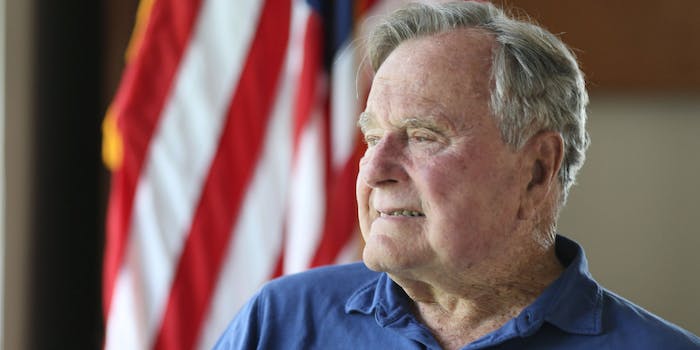 The announcement was made by this son, former President George W. Bush on behalf of himself and his siblings.

“Jeb, Neil, Marvin, Doro and I are saddened to announce that after 94 remarkable years, our dear Dad has died,” he said in a statement released Friday night.

He described his dad as “a man of the highest character and the best dad a son or daughter could ask for.”

Statement by the 43rd President of the United States, George W. Bush, on the passing of his father this evening at the age 94. pic.twitter.com/oTiDq1cE7h

Bush was the son of a senator and eventually became one of the most experienced public servants in American history. He served two terms as vice president alongside Ronald Reagan before being elected the 41st president in 1988.

Known as a moderate Republican, his time in office was remembered by foreign interventions in the Persian Gulf, Panama, and Somalia.

But despite passing some significant legislation like the Clean Air Act he lost his re-election bid to Bill Clinton in 1992.

His long resume includes serving as one of the youngest Navy pilots during World War II, for which he received the Distinguished Flying Cross. He was also a United Nations ambassador, envoy to Beijing, and the director of the Central Intelligence Agency.

The end of his life was devoted to humanitarian projects including giving assistance to victims after Hurricane Katrina in 2005. The former president has been suffering from vascular Parkinsonism, which is why in his later years he was seen using his wheelchair. This didn’t stop him from making appearances at fundraisers and continuing his humanitarian work.

Overnight, President Trump and first lady Melania Trump released a statement to say they “join with a grieving  Nation to mourn the loss of former president George H.W. Bush.”

The statement concludes, “Along with his full life of service to the country, we will remember President Bush for his devotion to family—especially the love of his life, Barbara. His example lives on and will continue to stir future Americans to pursue a greater cause. Our hearts ache with his loss.”

But his statement, although kind, is being highly criticized.

Some are quick to question the president’s intentions.  The Trumps’ feud with the Bush family is not a secret, considering during the 2016 Republican primaries Trump relentlessly mocked and belittled Jeb Bush, who was running for the Republican nomination.

His actions prompted the Bush family to respond. Barbara Bush called Trump a “showman” and said she didn’t know how women could vote for him.

And Twitter’s not buying his words.

Trump is just trying to ensure that he doesn't get black-balled from attending yet another funeral, such as Barbara Bush's where he was asked to NOT show up by the family: Trump to name Dec. 5 a national day of mourning for George H.W. Bush https://t.co/lPkKabq28v

Did you know that George H.W. Bush voted for Hillary Clinton? pic.twitter.com/iwf8Iv7I5Y

We all remember you mocking his “thousand points of light” speech… that speech was about kindness and charity- concepts that are apparently foreign to you..

Others pointed out that this tweets on Bush’s death didn’t even seem like he wrote them.

There is no way president dumpster fire wrote this tweet.

Wouldn't it be nice if we had a real president who actually expressed things like this himself? Of course, we all know Trump didn't write this. Once again, the appropriate sentiment is expressed by some anonymous staffer. Soon enough, Trump will remind us who he really is.

True words. Thank you to whoever wrote them for Trump.

More statements have come in from former commanders-in-chief—with a bit less criticism.

Former President Barack Obama called Bush “a patriot and humble servant” and highlighted his years of service from being a decorated Naval aviator in World War II to the leader of the free world.

“It’s a legacy of service that may never be matched, even though he’d want all of us to try,”  he added.

America has lost a patriot and humble servant in George Herbert Walker Bush. While our hearts are heavy today, they are also filled with gratitude. Our thoughts are with the entire Bush family tonight – and all who were inspired by George and Barbara’s example. pic.twitter.com/g9OUPu2pjY

Bill and Hillary Clinton thanked the former president for his “great long life of service, love and friendship.”

“I am grateful for every minute I spent with him and will always hold our friendship as one of my life’s greatest gifts,” Bill Clinton said in a statement.

Hillary and I mourn the passing of President George H. W. Bush, and give thanks for his great long life of service, love and friendship. I am grateful for every minute I spent with him and will always hold our friendship as one of my life’s greatest gifts. https://t.co/1CYdrIeKmz

Bush’s wife and former first lady, Barbara, died in April of this year. He held her hand as she passed. A daughter, Pauline Robinson “Robin” Bush, died of Leukemia at age 4, in 1953.

He is survived by five of his children, 17 grandchildren, eight great-grandchildren and two siblings. Funeral arrangements haven’t been announced yet.