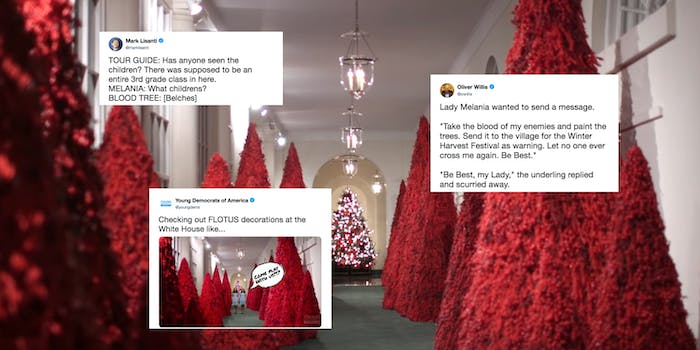 Melania Trump dismisses the haters trolling her over holiday decor

'I think they look fantastic.'

First lady Melania Trump responded on Wednesday to the all the trolling over her White House Christmas decor this week by simply dismissing the haters.

As far as Trump is concerned, the decorations are on point—and an avalanche of Twitter memes won’t change her opinion.

“We are in 21st century and everybody has a different taste,” Trump told reporters, according to BuzzFeed News. “I think they look fantastic. In real life, they look even more beautiful.”

Trump unveiled her theme and design for the White House Christmas decorations on Monday in a one-minute long trailer only to be mocked online for some of her bolder choices, specifically the dozens of red “blood trees” lining the corridors of the east colonnade.

The internet grabbed hold of the image, which made instant meme material, and found all kinds of creative comparisons to horror media like The Shining and The Handmaid’s Tale.

Checking out FLOTUS decorations at the White House like… pic.twitter.com/J0hcBD3DvG

Decorator: Okay, so we want to avoid looking like the entrance to the White Witch's Narnian castle like we did last year.

Melania: What about red?

Decorator: Sure, red ornaments are cheerful!

Melania: No. The trees. Red.

AIDE: There’s this perception you don’t care about children, so we need to—

MELANIA: Get me the blood-red nightmare Christmas trees with NO ORNAMENTS OR PRESENTS pic.twitter.com/2F3jv8oyAO

Maybe we just need to see them in “real life.”