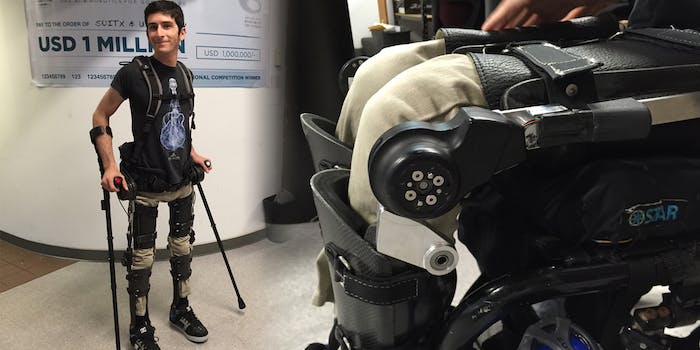 It's one of the smallest and cheapest on the market.

“I am not the robot, I wear the robot,” Steven Sanchez said of the Phoenix robotic exoskeleton that is helping paralyzed people walk again. The Phoenix, developed by SuitX, is a modular robotic device that enables people with limited mobility walk with the fluidity of natural movement.

Sanchez, now 28-years-old, was paralyzed 11 years ago in a BMX accident. He was casually playing around with fellow high schoolers on his bike when an accident left him immobile from the waist down.

For the last four years he’s been working with SuitX on the development, design, and technical execution of the lightweight machinery that’s helped him regain mobility. Sanchez, a machinist by trade, is one of the first people in the world to walk with the Phoenix skeleton equipped.

“You feel empowered in the suit,” he said in an interview with the Daily Dot. “You have all the control and you can tell it to go when you want it to go. If you’re not feeling comfortable in a situation, it’s light enough to move yourself around and get yourself in a better situation.”

Founded in 2010, SuitX works on technical solutions for immobility, endeavoring to make assistive devices as human-friendly as possible.

The Phoenix is a computerized system worn around the shoulders that communicates with modules on the outside of the hip and knee. The hip modules propel the leg forward in a walking motion, while the knee modules stiffen and loosen depending on whether the wearer is walking or standing still. It’s this technique that makes the Phoenix look and feel less machine-like than other robotic exoskeletons. 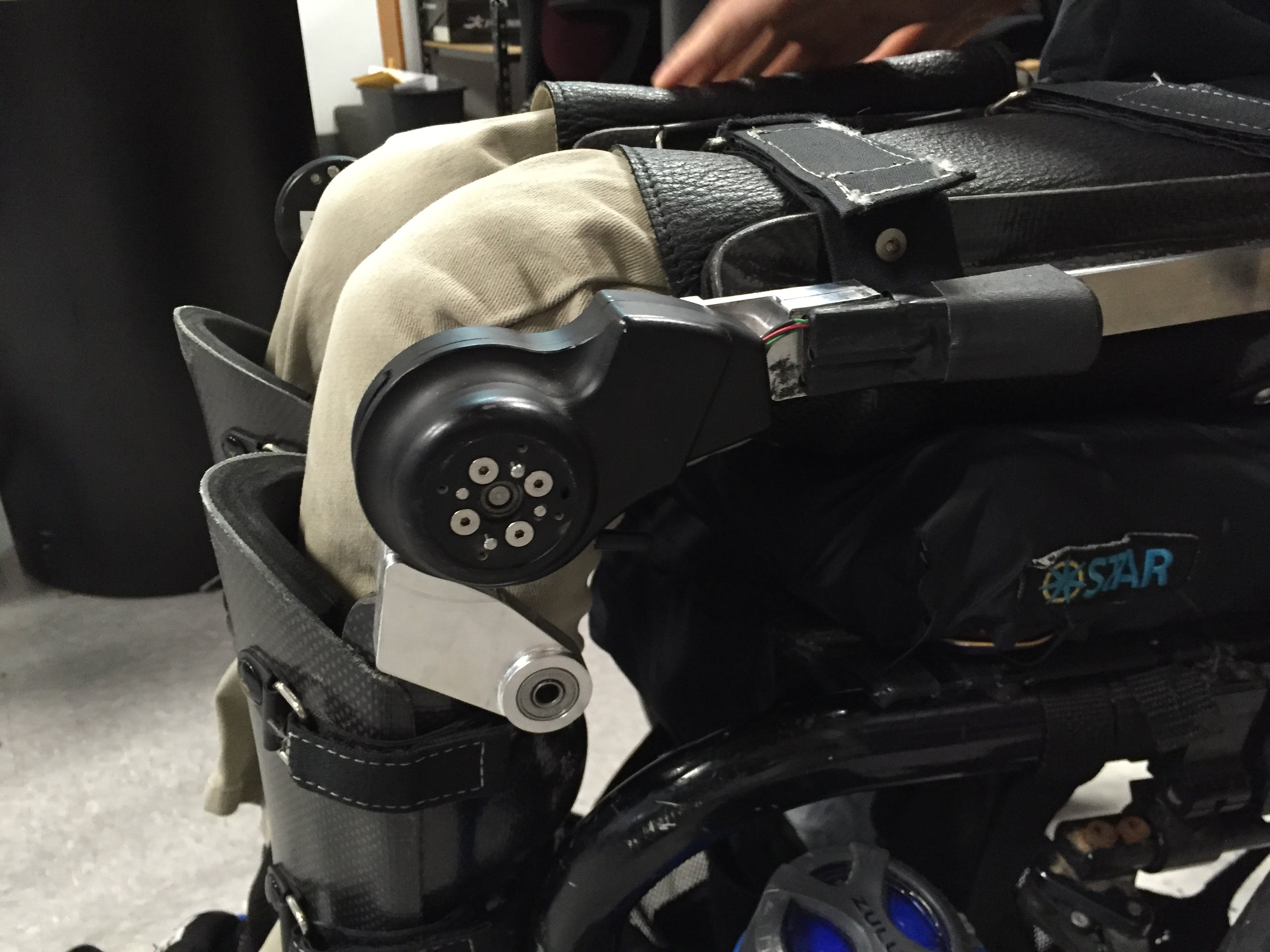 Movement is controlled by two buttons on a pair of crutches, which are pressed with each step to move people forward or backward and up or down. To stand up on his own, Steve pressed the forward button multiple times in a row, and the torque helped him rise from a seated position.

The suit connects to a mobile app that tracks the user’s motion for a wholistic understanding of patient care. Caregivers and doctors will be able to track how active individuals are in the suit, and can customize exercises for each person and quantify their activity.

Dr. Homayoon Kazerooni, cofounder of SuitX and a pioneer of robotic exoskeletons since the late 1980s, said that the company designs their devices to be as minimalistic as possible, putting just as much emphasis on the software backbone controlling the suit as the hardware that moves the person. Eventually, the tech might be small enough to be worn underneath clothing. Weighing a lightweight 27 pounds, the suit can be modified to fit a wearer’s customizable braces, like Sanchez’s, or people can wear general ones developed by the company.

Once available to consumers, the Phoenix will be the cheapest exoskeleton for people with limited movement, costing just $40,000. While that seems like a hefty price tag for the tech, consider that Sanchez paid $5,000 for the manual wheelchair he used during our interview, and $1,000 for the pillow he sat upon while in it. Similar and clunkier devices like Rewalk cost upwards of $70,000 and weigh 50 pounds or more. 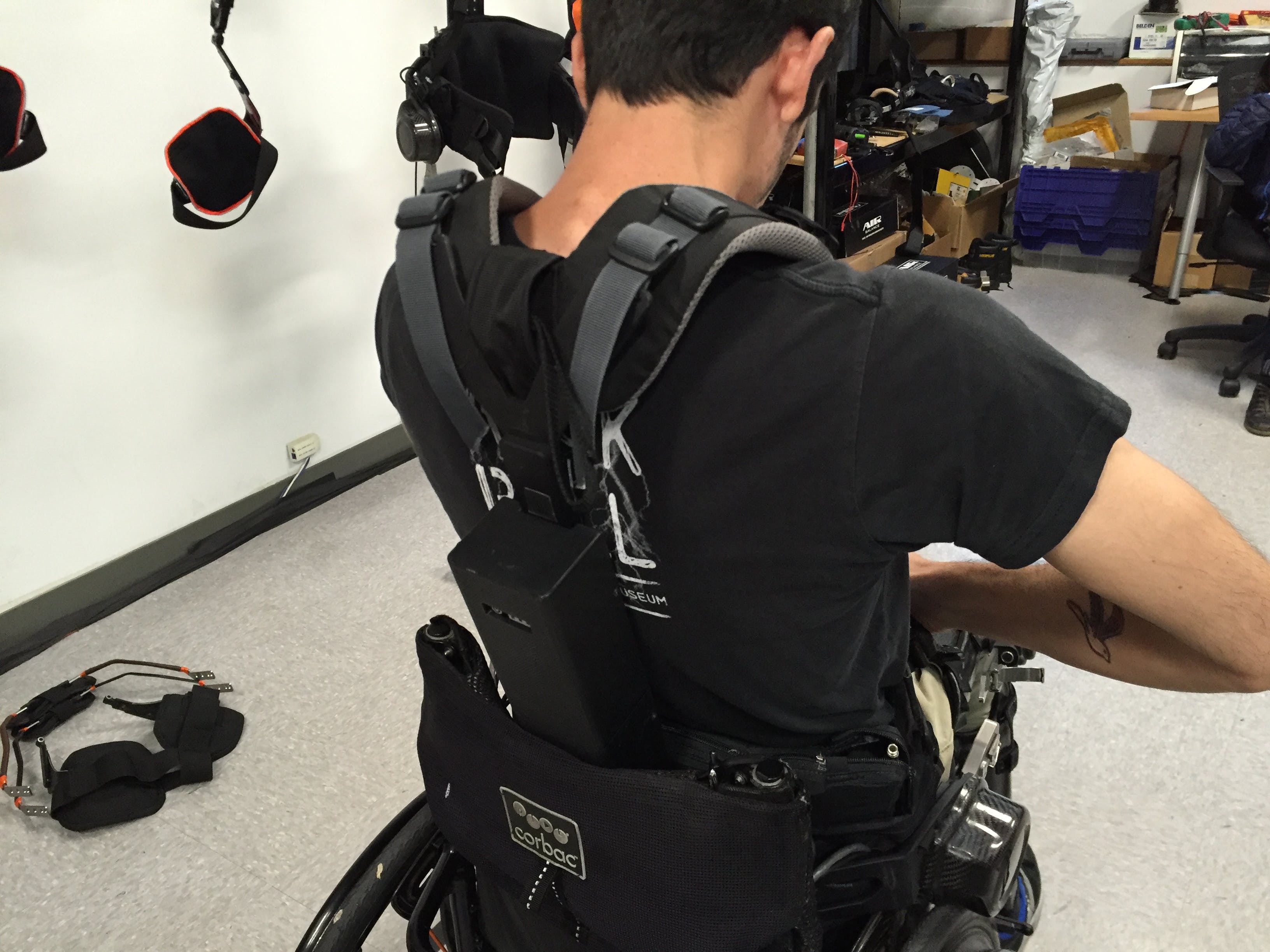 Kazerooni compares the work SuitX does to the Wright Brothers and the development of the first airplane. The first airplane didn’t have reclining seats and first class options, but the brothers’ breakthrough paved the way for the 500-passenger jet.

“I’m dreaming of something comparable to wheelchair pricing. Regardless of whether that happens in my lifetime, that’s not an issue,” Kazerooni said. “Someone has to get started, and things have to get better and better.”

For the team at SuitX, creating something that will enhance the independence of individuals with spinal cord injuries and children with disorders like Cerebral Palsy is just as trendy—if not more impressive—than building drones or Teslas or software for Bay Area big shots.

Kazerooni is a mechanical engineering professor at UC Berkeley, and almost all of the people who work at SuitX graduated from, or are pursuing an education, at the university. He says he tries to instill the values of making something meaningful over following the Valley hype machine of whatever cool tech product seems to be popular this year.

“It’s very important for me that this generation of people, who are very young, to know it is cool to work on technologies that help people,” he said. “I don’t want them to say oh yeah I’m working on a drone or I’m making a sport car. Every time I [hear] this cocktail party conversation, guys are talking about drones and turbo engines and all that.”

Sanchez said the company is like family, and the feeling is palpable. When I visited the group’s nondescript office near downtown Berkeley, the atmosphere was extremely casual and carefree. People made jokes with colleagues, snacked on potato chips, and celebrated a birthday while sharing cake. All the while, the employees were actively modifying robotic parts for the next iteration of the exoskeleton and testing out different versions on their own legs.

Sanchez took me through a demonstration of the Phoenix. It took about four minutes to put on his braces and get into the suit, at which point he stood up and walked around unassisted. His gait was fluid, knees swinging with each step, which he says provides a feeling unlike other exoskeletons he’s tried.

But for Sanchez, it’s not the promise of walking that’s the most compelling case for the Phoenix. He told me it’s the secondary injury prevention and health improvement that’s really changed his life.

Like many other paralyzed people and those with limited mobility, Sanchez suffers from painful pressure sores. He says it’s impossible to sit anywhere without his expensive pillow, or risk getting one of the painful skin injuries. They can appear in minutes, and take months to heal. In fact, he’s had a recurring one for the last six years.

“Pressure sores are very critical thing in terms of life and life expectancy,” he said. “Even if you have millions of dollars, pressure sores can kill you. This device gets you up out of your wheelchair and gives you the mobility to make your legs move, get your blood flowing, let your body heal itself.”

Walking, standing, and moving around independently significantly helps prevent such sores. Other health concerns like osteoporosis, the loss of bone density, are also caused by continuous sitting. The Phoenix can help address these issues, as walking and standing strengthens the bones and improves overall health of the wearer. Steve says he still prefers his wheelchair as his primary mobility device because it’s easier for now, but the secondary benefits of Phoenix are huge.

Yoon Jeong, cofounder of SuitX, is leading the production of the modular exoskeleton braces that will be available for adults and children. Braces won’t be customized perfectly to each individual, but they can be adjusted to fit patients of all sizes. For Yoon, the importance of her work and potential for robotics to change lives is underscored by the people who visit and test the suit.

“Things get really emotional here,” Jeong said. “When you see them walk after being in a wheelchair for so many years, and to see their families hug and cry, that’s the biggest thing that has been letting me keep moving forward and design better things for them.”

Only a handful of test pilots have tried it out so far; the company is working with a children’s hospital in Berkeley, Stanford University, VA medical centers, and the Santa Clara Spinal Cord Injury Center.

The Phoenix still needs to secure FDA approval, but once that’s been granted, the company will begin testing in more rehabilitation clinics. Kazerooni hopes that by the end of the year, the suit will be available to its first patients at rehab centers for further evaluation. The company also recently won the UAE AI Robotics for Good competition, with a $1 million prize.

It will be a long time before exoskeleton technology will be compact and advanced enough to let people with limited mobility walk around completely independently with a lightweight, flexible robotic device. But SuitX is laying the groundwork for a future in which assistive devices connect to apps, patients, and caregivers and help paralyzed people move unassisted through the world, should they choose to.