The weirdest, worst, best ideas from the Stupid S**t No One Needs hackathon

'Most of the ideas were stupid, but none of them were dumb.'

Under a portrait of Nikola Tesla in hues of blue and green, a steady hum of laughter and keystrokes gave life to the Stupid Shit No One Needs And Terrible Ideas hackathon. At the Noisebridge maker space in San Francisco this weekend, a large group of programmers, hackers, engineers, and designers all worked diligently on projects that were meant to make no sense at all.

Maker Arlen Abraham and his team member Sarah Tappon created a literally disruptive wearable: an air horn connected to Twitter’s API by a Spark Core microcontroller that goes off whenever someone tweets the hashtag #disrupt. Attendee Julia West made “Spotifon” (yes, Spotify + phone), a service that lets you call a number and request to listen to any one of a dozen songs. Ruby and JavaScript developer Christa Hartsock made @youareherebot, a Twitter bot that will send you a photo of your location when you tweet at it with your location turned on. Indie game developer Nevyn Bengtsson built a giant “cyborg helmet,” complete with an embedded VR headset and smartphone, programmed to make random noises for absolutely no purpose at all.

Added a video of the cyborg head :D https://t.co/8s0NbRdz1L

The Stupid Shit No One Needs And Terrible Ideas hackathon is an offshoot of the New York-based event of the same name. Most of the attendees have jobs in technology or other industries that require them to work on projects with a purpose, and this hackathon gives them an outlet to create something for no other reason than to create it. 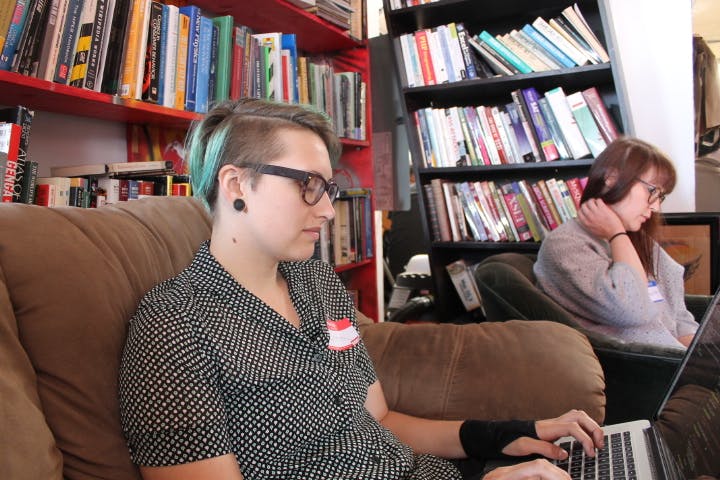 As organizer Noah Swartz explained, it’s not necessarily meant to satirize Silicon Valley startups. Instead, it’s intended to enable a creative avenue for people to goof off with the skills and tools they use everyday.

“I have often chastised people for coming up with ideas that were too useful,” Swartz said. “We’re not going to stop anyone from making a project if it looks useful, but I think absurdity is key.”

As inspiration for useless technology, Swartz points to Sudo Room, a community hackerspace in Oakland, Calif. that co-hosted the hackathon. Hackers at Sudo Room reprogrammed a giant industrial robot arm used for moving heavy pieces of machinery, to instead be used to draw pictures.

Most people took the rule about making pointless things seriously, although there were some hacks that actually seemed impressively useful: Kelly Peng made pupil-tracking technology that allows people to type without a keyboard.

In the middle of Noisebridge, an attendee named Sam sat heads-down, hyper-concentrated on the screen of his heavily-stickered laptop, surrounded by old game accessories. There were Nintendo 64 controllers, a bongo peripheral, a Power Glove, Wii remotes, and many more.

“I’m combining terrible game controllers throughout history with new terrible Web ideas,” he explained. “Like balancing your checkbook using a Wii Balance Board, or fishing for products online with a Dreamcast fishing rod.” 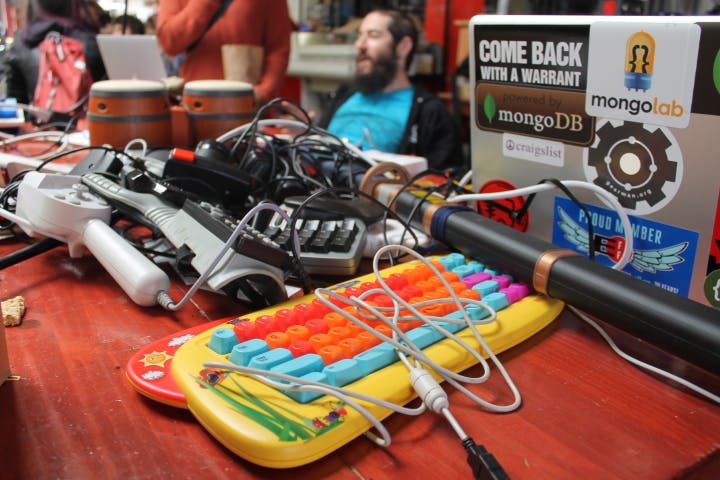 Sam brought all the controllers straight from his garage, and successfully reprogrammed some of them to actually manipulate boring activities on the Web.

While many of the hacks were software-focused, some non-technical attendees used exclusively physical components. Claudia Vilardy, a project assistant for a Bay Area contracting company and former prop builder, teamed up with Dustin Selman to create the “UNbrella”—a device that brings you your own personal raincloud. By combining water pumps, a sprinkler nozzle, and bits of vinyl connected to an umbrella, Vilardy could make it rain from inside the umbrella.

All day Saturday teams in San Francisco and Oakland worked on their projects, many until the early hours of the morning, only to come right back the next day for bagels and coffee and to prepare for pitches Sunday afternoon at the Roxie Theater in San Francisco’s Mission District.

Almost 60 teams pitched ideas. Lengths varied from ten seconds all the way to the full two minutes the teams were allotted. And the packed theater could not stop laughing.

I’ve attended a number of hackathons, and have never been so impressed with one. My sides ached from laughing along with the project makers, and at one point I even forgot to take notes. It was also the most diverse hackathon I’ve ever been to in terms of women and people of color who participated. 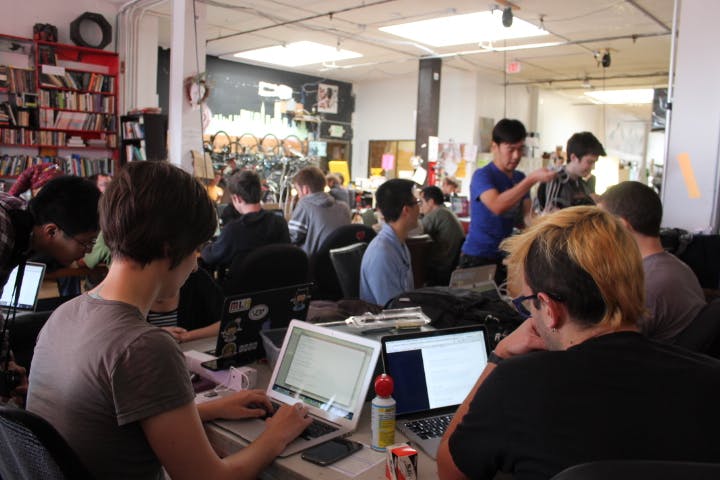 When I talked to Swartz before the event, he said anyone of any skill set was welcome to participate. Of course, having attended or hosted a number of hackathons, I was skeptical; usually these things are attended by a sea of men in hoodies hacking until 4 a.m.—and most don’t want non-technical teammates. But after meeting participants and watching all the pitches, I understood that Swartz was genuine.

The event wasn’t necessarily about building something, though most people did wind up creating something clever and completely useless. Rather, the Stupid Shit No One Needs And Terrible Ideas hackathon highlighted a culture in the Bay Area that’s often overlooked in criticisms of the tech community. Everyone who attended was there to be a part of something bigger—a thriving group of makers, builders, creatives, and wanderers, all of whom were open to sharing new ideas and teaching others what it’s like to build something from scratch. Not because such products are meant to change the world but because creativity for creativity’s sake is good enough.

In the words of Joshua Schachter, a Silicon Valley entrepreneur and angel investor who sponsored the hackathon, most of the ideas were stupid, but none of them were dumb.

After the teams finished pitching on Sunday and groups made their way back to project stations to clean up before celebrating with beer, Swartz told me he was really surprised with the attendance.

As it turns out people in the Bay Area really do just want to make things for the fun of it. And perhaps some of the hacks built in a weekend will eventually be reprogrammed into something that really does matter.