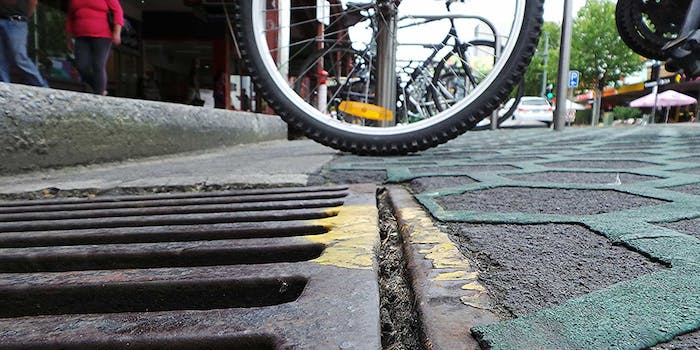 Big data isn't always terrifying, even if it usually is.

Workout fanatics are famously obsessed with the minutiae that fitness apps track, but get enough small data together and it quickly turns into big data. Recognizing the value in its aggregated data, Strava—one of the better-loved activity tracking apps—recently made the decision to sell its data to city governments looking to know more about how residents move through their streets.

Created by two athletes who met on a crew team, Strava seems genuinely dedicated to the population it serves—mainly serious cyclists and runners. “We are not trying to take people off the couch and get them on their first run,” explains Mark Gainey, co-founder and CEO of Strava, during a presentation at this week’s GROW Conference. “We’re assuming that the customer we’re targeting has already discovered their sport.”

Because they’re usually already quite deep into their sport of choice, Strava’s users have what Gainey calls “a passion for data”—and an understanding about how it can fuel performance improvements. Using built-in sensors like GPS and the accelerometer, the app uses mobile devices to track routes, distance, and other metrics, which it compiles and gamifies to encourage users to compete against one another—and that keeps them hooked. “After you captured your run or your ride, we try to give you something else to reward you, to keep you motivated,” Gainey said.

When the time came to decide what to do with the rich set of data building up on its servers, Strava made an interesting choice. Dedicated to its premium subscription revenue model (versus relying on ads for revenue), Gainey decided to sell its data in a way that actually gives back to its users. It sounds fishy, but teaming up with city governments isn’t exactly the most lucrative move—Strava certainly could have made more selling to someone else.

Strava’s urban data sharing initiative, known as Strava Metro, grew out of the company’s “heatmaps,” an experiment in citywide data visualization. Users can opt out of data aggregation with in-app privacy toggles, but Strava also strips identifiers out of its data sets. The result is more than the sum of its parts. The city of London and the Oregon Department of Transportation (ODOT) are two of Strava’s major government partners, and governments in Virginia, Florida, Australia, and Scotland have followed suit. The app provides a kind of contextual data that cities have a difficult time collecting on their own.

“We serve it up in a way that city planners can look at it,” Gainey said, referring to the GIS format the data gets converted into. “Using that data, day by day through the week [they] begin to make very thoughtful decisions around urban planning.”

Realtime traffic app Waze—likely the most compelling alternative to Google Maps—made a similar decision. Waze’s data is culled from more than 50 million drivers around the world, and it’s both incredibly accurate—Waze pings a device’s GPS once each second—and anonymous. If it makes one wrong move with user data, crowd-powered Waze stands to lose everything, noted Julie Mossler, Waze’s head of global communications. “If we lose their trust, then the product literally stops working.”

For Waze, the data sharing is bi-directional, improving both local transportation bureaus and the app itself. “We work with local DOTs and then they give us data back,” Mossler said. “We never sell our data, but by opening up our data to governments… it’s only going to make our product better.”

Both Strava and Waze contend that they’re selling (or sharing) data without selling out. “We can make these environments safer for you,” Gainey said. And while he admits that licensing out data for city planning purposes “isn’t going to be a 100 million dollar business,” it’s a way of leveraging Strava’s data that stays true to its ideals.

And it’s one more barrier between you and in-app advertising.