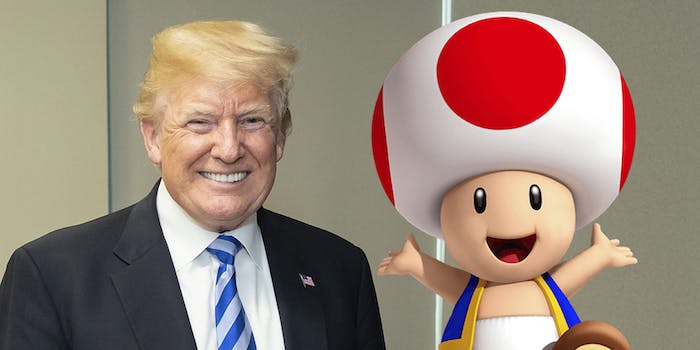 The former adult film star described it in less-than-flattering detail.

President Donald Trump‘s dick may not seem like a pressing national issue, but it’s become one on the internet.

America’s always been fascinated with the penises of presidents, and Trump himself has openly discussed the size of it, saying he had “no problem” down there, and noting that it was not “small.” But Trump’s former mistress, Stormy Daniels, is now saying that the president might have a somewhat dubious relationship with the truth.

According to the Guardian, which obtained a copy of her memoir Full Disclosure, the former adult film star who says she slept with Trump in 2006 described his penis in some less-than-flattering detail, declaring that it resembled a Mario Kart character.

You can probably guess which one.

“He knows he has an unusual penis,” Daniels writes. “It has a huge mushroom head. Like a toadstool…

“I lay there, annoyed that I was getting fucked by a guy with Yeti pubes and a dick like the mushroom character in Mario Kart…

And though they are all generally the same, as noted online, there’s more than one “mushroom” character in the Mario Kart universe.

Admittedly, while the size of the head is interesting, many dicks are shaped like Toad from Mario Kart, and mushrooms in general. In a way, Daniels has humanized the president. She declared it small but not “freakishly small,” a sentiment many a man can relate to.

Trump, however, would maybe claim he’s got a dick like Luigi.