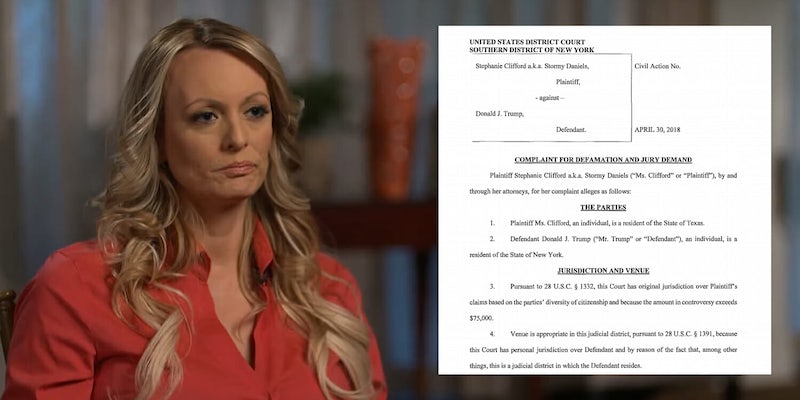 Adult film actress Stormy Daniels is suing President Donald Trump for calling a forensic sketch made of a man who allegedly threatened her a “total con job” in a tweet earlier this month.

In early April, Daniels and her lawyer released a sketch of a man who she says approached her in Las Vegas following a 2011 interview she gave with InTouch Magazine that detailed her affair with the now-president. Daniels said the man said it would “be a shame” if something happened to her while she was standing in a parking lot with her daughter.

Shortly after, Trump commented on Daniels’ sketch that was publicly released.

“A sketch years later about a nonexistent man. A total con job, playing the Fake News Media for Fools (but they know it)!” the president wrote.

The lawsuit, filed in U.S. District Court in the Southern District of New York, claims that Trump’s tweet “falsely attacks the veracity” of Daniels’account of the threat, and “is false and defamatory.” It also claims that Trump was accusing her of a crime with his tweet.

“In making the statement, Mr. Trump used his national and international audience of millions of people to make a false factual statement to denigrate and attack Ms. Clifford,” the lawsuit reads. “Mr. Trump knew that his false, disparaging statement would be read by people around the world, as well as widely reported, and that Ms. Clifford would be subjected to threats of violence, economic harm, and reputation damage as a result.”

Daniels’ lawsuit says the tweet has caused damages “in excess of $75,000.”

The adult film actress also sued Trump earlier this year to release her from a non-disclosure agreement she signed in exchange for $130,000 that the president’s lawyer, Michael Cohen, paid her.

You can read all of her most recent lawsuit here: