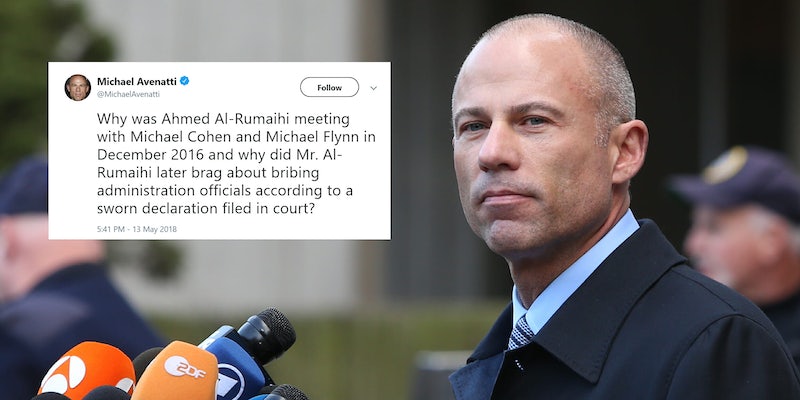 Is Stormy Daniels’ lawyer poised to drop another bombshell?

This is a lot.

Micheal Avenatti, the lawyer for adult film star Stormy Daniels, dropped a new series of cryptic tweets this weekend that have sleuths online furiously speculating about what new twist may come in the saga with President Donald Trump.

And to be clear – by “warning ignored” I am referring to the refusal of various parties to come clean and the failure of various parties and news outlets to stop with the personal attacks on our side. Keep pushing us. #consequences #basta

Why was Ahmed Al-Rumaihi meeting with Michael Cohen and Michael Flynn in December 2016 and why did Mr. Al-Rumaihi later brag about bribing administration officials according to a sworn declaration filed in court?

According to Law and Crime, Ahmed Al-Rumaihi, who Avenatti references, is a former diplomat from the Qatari government who is currently involved in a lawsuit with Ice Cube and another person over funding the BIG3 basketball league.

In those filing, Jeff Kwatinetz, Ice Cube’s partner, claimed that Al-Rumaihi paid money to Michael Flynn, Trump’s former national security adviser, who pled guilty to lying to the FBI, and that Al-Rumaihi tried to arrange a meeting with Steve Bannon, promising money for influence.

“Al-Rumaihi laughed and then stated to me that I shouldn’t be naive, that so many Washington politicians take our money, and stated ‘do you think Flynn turned down our money?’” he said.

The Bannon bribery plot was reported on by the Daily Mail last week. Some thought Avenatti was merely tooting his own horn, given his penchant for seeking publicity.

Avenatti's big reveal is an already public/uncorroborated claim by Ice Cube's business partner Jeff Kwatinetz, who is currently suing a group of Qatari investors (including Al-Rumaihi) for $1.2 billion https://t.co/EkcwBjh4tN

So what could Avenatti be speculating about? Twitter certainly had its own ideas, predominately focused on the privatization of a state-owned Russian oil company.

THREAD/Timeline on the significance of #Qatar as alleged intermediary between Russia and Trump through Dec'16 Rosneft sale (from #SteeleDossier, revelations about Qatar-backed $184M loan to Kushner, and now from @MichaelAvenatti). 1/ https://t.co/VpNTp1ylxl

If @MichaelAvenatti can prove that Trump got a cut of the Rosneft deal, then it's case closed on conspiracy with Russia. https://t.co/mBvIbN0R8l

Al-Rumaihi works for a branch of the Qatar Investment Authority, which purchased a stake in Rosneft FIVE DAYS prior to this meeting in Trump Tower. https://t.co/Pl55oVGKV7

The Rosneft deal is a long-standing supposed smoking gun in the collusion speculation by Trump-Russia truthers. In the deal, the Trump Organization somehow helped broker a massive sale of a Russian oil company to Qatar.

From the highly speculative The Stern Facts blog:

Donald Trump and Russia conducted the transaction in three phases; Phase 1 began in early 2016 with a meeting of the minds at The Mayflower Hotel to start the deal and a due diligence period, Phase 2 began just before the Republican National Convention and continued through Election Day, and Phase 3 happened after Trump’s shocking win and concluding just days before BuzzFeed published the bombshell dossier describing the deal.

The end result allowed Russia to trade stolen emails to help to Donald Trump’s election campaign (as well as that of many Republican Congressmen), in exchange for help circumventing American sanctions to transact the sale of Rosneft, which Putin desperately needed to finance his budget deficit.

Why the Trump Organization would need to be a middleman in that deal is never really explained in all the speculation, except for that Qatar’s state-run airlines kept an office in Trump Tower.

While this is entirely speculative, Avenatti has had a brief history on delivering on his messages on Twitter, once promising information on secret payments made to Trump’s lawyer Michael Cohen, which he then produced, news that then roiled Washington.

And if you’re wondering what this somehow has to do with news that broke in January about Trump’s payment to Daniels well… ¯_(ツ)_/¯.