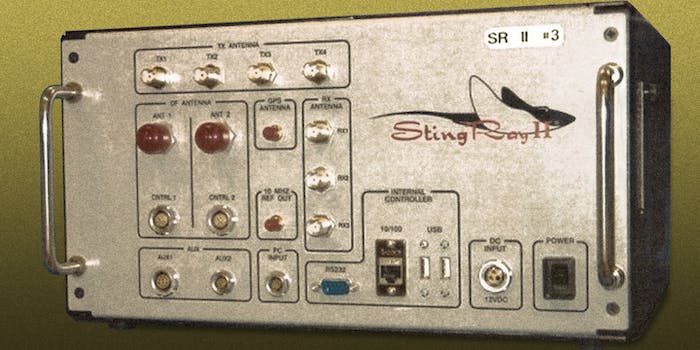 The use of these surveillance devices has expanded significantly, and lawmakers are worried.

The leaders of the powerful House Oversight Committee want federal agencies to explain how they spy on Americans with devices that mimic cell towers to intercept their communications.

In letters to the heads of those agencies, the four lawmakers—respectively the chairmen and ranking members of the House Oversight Committee and its information-technology subcommittee—requested all legal guidance and other policy documents related to stingrays and the data they collect.

“We would want to know, how much are the agencies using this technology? Are they going to judges and getting warrants?”

The Department of Justice and the Department of Homeland Security—which oversee major law-enforcement agencies like the Federal Bureau of Investigation, the Drug Enforcement Administration, and the Secret Service—recently issued guidance requiring a warrant for the use of a stingray. Chaffetz and two other lawmakers have introduced a bill to formally codify this requirement. But he and his colleagues are also concerned that stingray use has expanded beyond those departments.

In late October, the Guardian reported that the Internal Revenue Service owned and used stingrays that it bought between 2009 and 2012. “Despite their extensive capabilities,” the Guardian story noted, “they require only a low-level court order called a pen register, also known as a ‘trap and trace,’ to grant permission for their use.”

Committee leaders worry that the IRS and other agencies outside DOJ and DHS are not respecting the Fourth Amendment in their use of stingrays.

“As it was with DOJ and DHS before those agencies issued department-wide policies governing use of the devices, the Committee is concerned that other federal agencies may be governed by a patchwork of policies,” the lawmakers wrote in the letter. “Those policies may permit the use of cell-site simulator devices through a lower standard than a search warrant obtained after a showing of probable cause.”

Nathan Wessler, an attorney at the American Civil Liberties Union’s Speech, Privacy, and Technology Project, praised the breadth of the questions in the letter, noting that much of the legal regime governing the use of stingrays remains hidden from public view.

“These are just the right questions for a congressional oversight [committee] to be asking to get basic but important details about what [each] department is doing,” Wessler told the Daily Dot.

Noting that DOJ and DHS until recently did not require their agents to get warrants to use stingrays, Wessler said that documents produced through this inquiry could shed light on equally troubling practices in other departments.

“We would want to know,” he said, “how much are the agencies using this technology? Are they going to judges and getting warrants? If so, are they disclosing to judges that they are going to use a stingray device and how it functions? Are they keeping a record of how often they’re using it? And are they providing notice to defendants in criminal cases to let them know that this technology has been used?”

A committee aide would not comment on whether Chaffetz would subpoena uncooperative agencies to obtain documents or testimony. The aide, who was not authorized to speak on the record, said only that Chaffetz expected all agencies to comply with the requests for information.