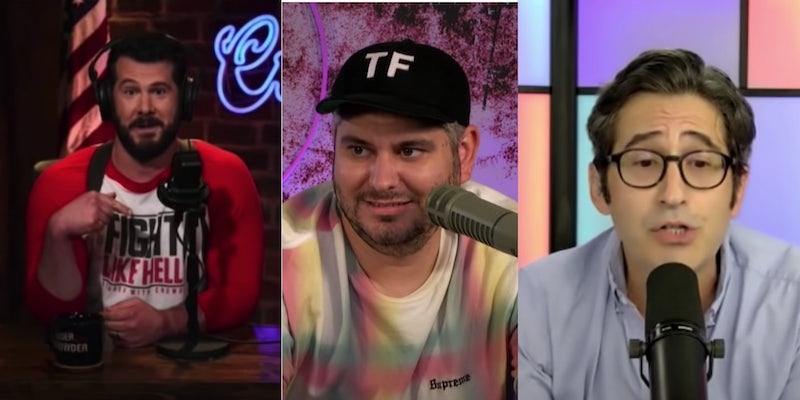 The term 'Cold Feet Crowder' is spreading across social media.

The fiasco began after Ethan Klein of the popular H3 Podcast was challenged to a debate by Crowder following a weeks-long spat between the two over the coronavirus pandemic.

Klein in late May had criticized podcaster Joe Rogan for making anti-mask statements, telling his viewers to instead listen to the advice from the Centers for Disease Control (CDC).

“The CDC is like this whole governmental body with scientists and shit,” Klein said at the time. “They just tell us what to do. You don’t have to think about it, dude.”

Responding to the Klein, Crowder, who has repeatedly spread conspiracy theories about the pandemic, mocked the podcast host for what he deemed as dangerous subservience to the federal government.

But when Crowder showed up on Monday to debate Klein, who is admittedly not a political commentator, Seder joined in on the call as well.

“Oh no, it’s Sam Seder! What a fucking nightmare!” Crowder says. “I had no idea this was going to happen.”

Seder has repeatedly attempted to debate Crowder, who is best known for arguing with college students in his popular “Change My Mind” videos. Seder even claims that Crowder backed out of a previous debate at Politicon in 2018 after being told to do so by his dad.

Crowder responded to the appearance of Seder by lashing out at Klein, accusing the YouTuber of being deceitful. Klein argued in response that Crowder only attempts to debate people such as himself who lack political knowledge.

Despite repeated attempts by Seder to get a debate rolling, Crowder spends several minutes dodging questions before ultimately ending the call. Crowder even admitted during the face-off that he had been monitoring Seder’s podcast in order to see whether he would attempt to interject himself into the debate with Klein.

The internet responded to the moment by ruthlessly trolling Crowder, who has largely built his name on his so-called debate skills. The term “Cold Feet Crowder” spread like wildfire across social media as well.

Although a handful of people attempted to defend Crowder, the overwhelming majority of commentary appeared to argue that the conservative had thoroughly embarrassed himself.

“Seeing Steven Crowder finally being made to face Sam Seder only to run away with his tail between his legs shouting weird shit like ‘Ok then take of your glasses!’ feels so damn cathartic,” reads one tweet.

Unsurprisingly, Crowder on Tuesday attempted to portray the incident as a win in his favor. In a video uploaded to his YouTube channel, Crowder called Klein passing off the debate to Seder as “The Greatest SELF OWN.”

“How cowardly is it to accept an honest debate challenge and bring in a grifter with 1/6 of your following to debate for you?” Crowder said.

Despite the growing support for a debate between Crowder and Seder, it doesn’t seem the conservative commentator will be debating anyone other than YouTube comedians and college kids anytime soon.