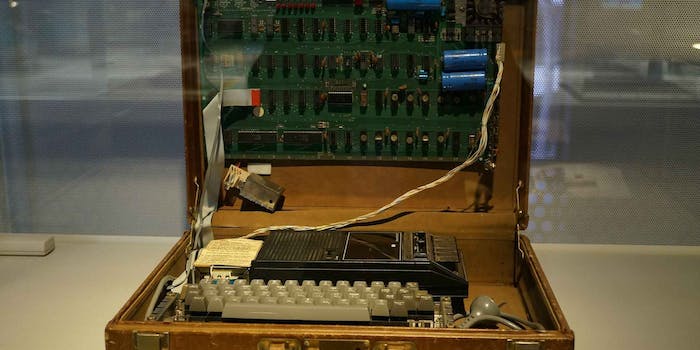 Auction house Christie's is selling off the classic Apple device, with a starting bid of over $370,000.

Every Apple device has been influenced by the design of Steve Jobs, but for around $500,000, you could land an Apple 1 computer built by the man himself.

London-based auction house Christie’s is selling off the classic Apple device, with a starting bid of over $370,000. Christie’s expects the bidding for the computer to continue, with the final price being between the $464,000 and $773,000 range.

While the Apple II is the device that launched Apple’s initial success, the Apple 1 is a rare find. Launched in 1976, only 200 were ever made, and each one was handmade by Steve Jobs and Steve Wozniak.

Only about a quarter of those original machines still exist, in part because Jobs and Wozniak offered a credit program to get buyers to trade in the computer and switch to the Apple II. The Apple 1 models were then destroyed after being reclaimed.

A database of the rare devices maintained by Mike Willegal accounts for 66 originals as of June 2015. Fifteen of those are part of public collections, making Christie’s auction to obtain an Apple 1 for private ownership an especially rare occurrence.

If you’re thinking about placing a bid on the Apple 1 with the intention of replacing your current computer, you should be warned: This particular device hasn’t been turned on in a decade. It was last confirmed to be working in 2005. While the computer could be brought back to working condition, it would take some technical knowhow to do so. Plus, it’s going to need a ton of driver updates.

If you’re more interested in the device as a collector’s item, though, then you’ll be pleased to learn the auction includes the first manual issued by the Apple computer company.

Christie’s auction for the Apple 1 runs until Oct. 29, so you still have time to flip some couch cushions and collect your change to place a bid.