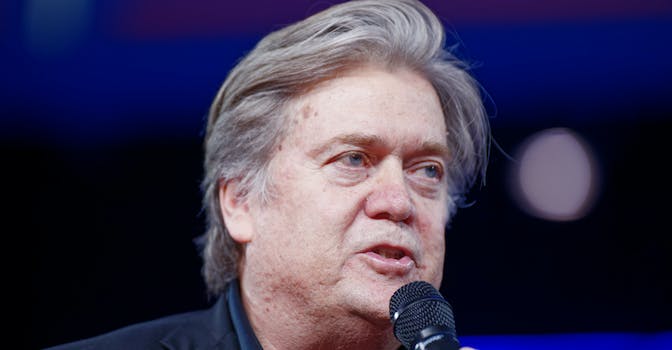 According to the Washington Post, in recent weeks, Bannon has developed an idea for how the president can stop the investigation into his campaign’s ties to Russia, which has already resulted in numerous arrests and indictments.

Tell Mueller that isn’t cool for him to use all the evidence he’s collected in the past year.

Bannon is also recommending the White House cease its cooperation with Mueller, reversing the policy of Trump’s legal team to provide information to the special counsel’s team and to allow staff members to sit for interviews.

And he is telling associates inside and outside the administration that the president should create a new legal battleground to protect himself from the investigation by asserting executive privilege — and arguing that Mueller’s interviews with White House officials over the past year should now be null and void.

That’s actually Step Two of Bannon’s idea to get Trump back on track, with Trump first firing Deputy Attorney General Rod Rosenstein, whom Trump appointed but who is also overseeing the special counsel’s investigation into the president.

While firing Rosenstein and appointing someone who would limit Mueller’s inquiry could produce the desired outcome, the other part of Bannon’s plan is extremely dubious. Bannon is saying that Trump could retroactively invoke executive privilege because he could claim his White House lawyers didn’t properly explain his executive privilege to him.

“The president wasn’t fully briefed by his lawyers on the implications,” Bannon told the Post. “It was a strategic mistake to turn over everything without due process, and executive privilege should be exerted immediately and retroactively.”

Maling in strategic mistakes in the process of covering up a crime doesn’t mean you get to get away with the crimes you may have done.

The Post spoke to legal experts who had a similar belief.

Legal experts are dubious about Bannon’s idea that the White House could suddenly claim executive privilege on interviews that were given voluntarily by officials and be able to exclude them from an investigation that is partly reliant on those interviews. They also wonder if this action would even be allowed under the law and are certain it would be challenged in court.

And a legal mind no defter than former White House aide Anthony Scaramucci called it absurd.

This advice is like citing Marvel Comics in a Supreme Court brief and oral argument. https://t.co/goySmrN5YX

The news comes as some of Trump’s staunchest supporters on Capitol Hill floated the idea of impeaching current FBI Director Christopher Wray, who Trump also appointed.