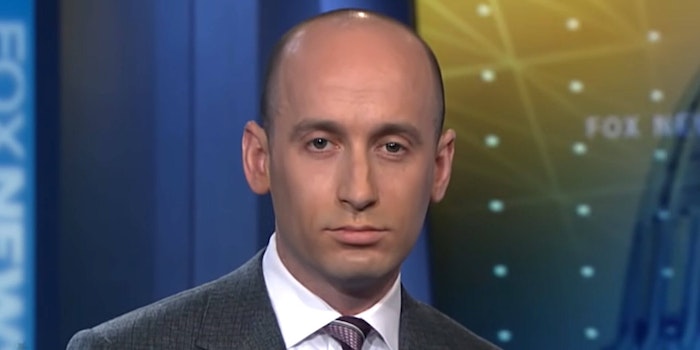 In a tweet Thursday about some standard White House personnel moves—Mike Pence getting a new spokesperson after his left to join President Donald Trump—Washington Post reporter Nick Miroff dropped a tidbit that left the internet unsettled.

While it’s not uncommon for people in similar fields to date, Miller is reviled by those on the left for his views on immigration and is considered the Trump administration’s biggest hardliner and resident xenophobe.

He’s insisted the Statue of Liberty doesn’t welcome immigrants, thrown a tantrum on national television, been accused of out-and-out white nationalism, and gone on the Sunday shows with a horrific hair situation.

Pence has hired Katie Waldman, 27, to be his new press secretary, per NBC. She was a spokesperson for DHS under Nielsen, then comms director for Sen McSally. Also worth noting: Waldman is dating Stephen Miller https://t.co/ESjkw3fbyC

But now he has a girlfriend, and it’s making people upset.

Someone is dating Stephen Miller. Guess the Trump admin wasn’t bluffing when they said they were bringing back torture.

My instant reaction to the phrase, "is dating Stephen Miller.." pic.twitter.com/geuF7RRCmM

Good lord. Someone is actually dating Stephen Miller? There have to be easier ways. https://t.co/EkIBV1f0eD

“Dating Stephen Miller”
That sounds like the title of a John Carpenter horror film.

Interestingly, Waldman served under Nielsen, who Miller forced out for being weak on immigration.

Maybe they’re made for each other?