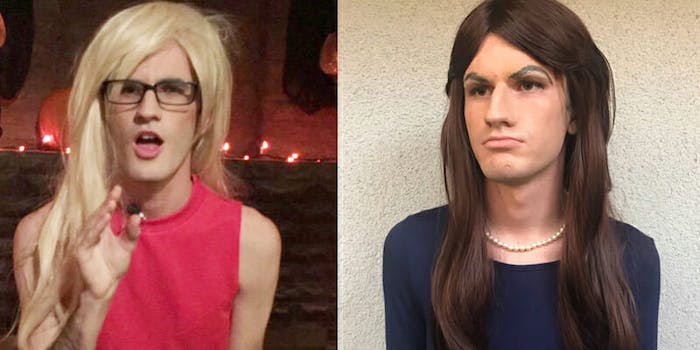 Red is the new orange and black!

Forget witches, zombies, mummies, and ghouls. If you want to dress as something truly terrifying for Halloween this year, look no further than Fox News. Or, as you could say, red is the new orange and black.

Indeed, the real thing that should be keeping us all up at night (well, unless you’ve been watching Netflix’s The Haunting of Hill House, in which case, you’re excused) is America’s democracy hanging in the balance thanks to the relentless gaslighting from President Donald Trump and his surrogates.

As such, self-proclaimed “professional gay fanboy and political costumer” Matt Gehring has been dressing up as prominent conservative figures for Halloween for the past three years. It started back in 2016, when—just days before the presidential election—Gehring went as everyone’s favorite 20-something shouty blonde and former Blaze host, Toyota Lasagna. Err, I mean, Tomi Lahren.

In 2017, just three months into Sarah Huckabee Sanders’ reign as White House Press Secretary (following the exit of Sean Spicer), Gehring couldn’t decide between Sanders and Trump’s sushi-wasting senior advisor Stephen Miller. So instead he went as both!

“I couldn’t decide who was more evil, so I became Sarah Huckabee Sanders AND Stephen Miller for Halloween,” he wrote on Twitter.

Which brings us to the dystopian cesspool that is 2018.

Obviously, it would be hard to top the likes of Lahren, Huckabee Sanders, and Miller, so this year Gehring went with an inspired take on the internet-famous Kent State Gun Girl. Because as he puts it, “there’s nothing spookier than the lack of common sense gun reform.”

The Kent State Gun Girl, otherwise known as Kaitlin Bennett, went viral back in May after insisting on posing for her graduation picture with an AR-10 assault rifle. Bennett refused to apologize for the viral photos at the time, adding that “as a woman, I refuse to be a victim & the second amendment ensures that I don’t have to be.”

What Gehring dress as for Halloween next year is anyone’s best guess, and more than likely not even yet of public awareness. With any luck though, maybe he’ll be able to go as the blue wave.