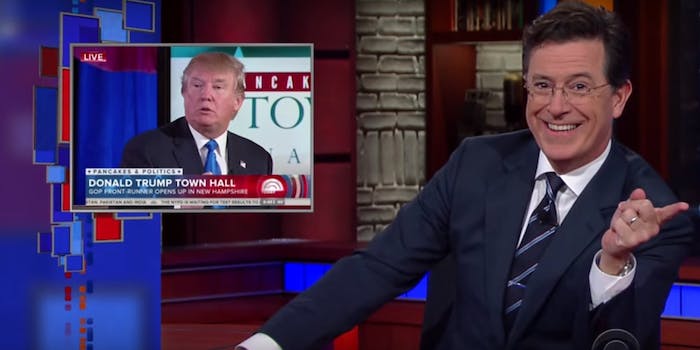 Trump seems to think $1 million is a small amount of money. So why not give it to a worthy cause?

When Donald Trump described $1 million as a “small loan” from his father, he was basically giftwrapping himself for unlimited mockery on late-night talk shows. Unsurprisingly, Stephen Colbert took the bait.

On The Late Show on Wednesday night, Colbert retold Trump’s hard-scrabble origin story as a poor millionaire who had to migrate all the way from Queens to Manhattan to find his fortune. But the real punchline came when Colbert challenged Trump to put his money where his mouth is. If $1 million is such a small amount compared to Trump’s outrageous riches, why not donate it to charity?

Armed with a giant check filled out to the Harlem Children’s Zone, Colbert challenged Trump to donate $1 million to children in New York. How, we wonder, will Trump respond?