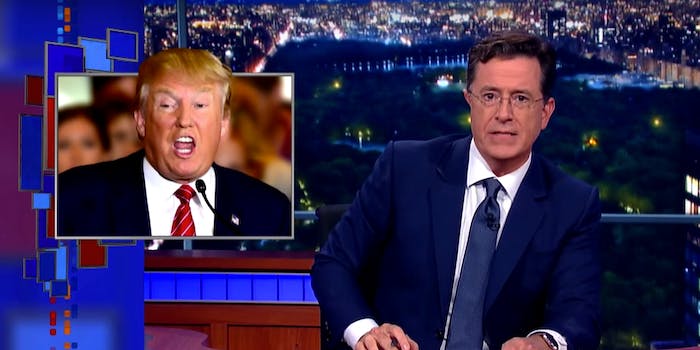 If Trump doesn't know it now, he will after he's in the White House.

A presidential candidate must be prepared for anything on the campaign trail, especially questions from reporters and debate moderators. But if you’re Donald Trump, that’s not important until you’re actually in the White House.

Trump may not know the difference between Hezbollah and Hamas, calling CNN debate moderator Hugh Hewitt’s proposed inquiry into the groups a “gotcha question,” but Trump says he’ll know everything about everything (and become more of an expert than everyone else) not when he’s proposing his plans for the country to potential voters, but after he’s already won.

Stephen Colbert gleefully demonstrates the depths of Trump’s knowledge on the military, which the real-estate mogul says he gained by going to a military-themed high school, and why we can judge him on things he said or did as a child—because he said he hasn’t changed.

These two will finally meet on The Late Show with Stephen Colbert on Sept. 22. We cannot wait.