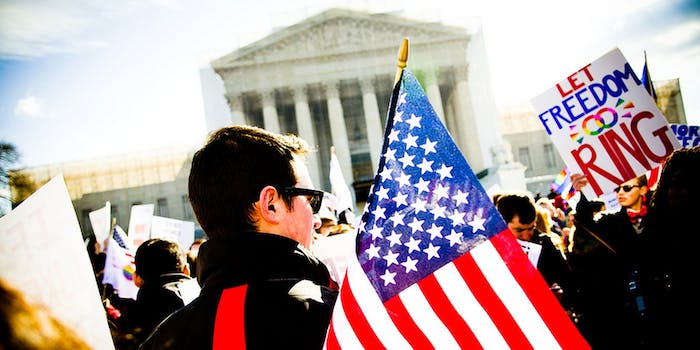 The decision to overturn the federal ban was just the beginning.

Supporters of same-sex marriage and its opponents may be on different sides of the issue, but there’s one thing many of them can agree on: It’s time for an answer.

Three legal briefs were filed last week to address the rise in lawsuits that have been filed since the Supreme Court struck down the federal Defense of Marriage Act.

Attorney generals from 15 states that allow same-sex marriage and 17 that don’t filed legal briefs with the Supreme Court on Thursday. They’re asking the justices to address cases from Virginia, Utah, and Oklahoma. According to the Associated Press, state attorney generals have asked the Supreme Court to issue a ruling specifically about state bans on gay marriage, because the bans have been ruled unconstitutional in the federal and appeals courts.

“The argument that the debate over legal recognition of marriages between same-sex couples should be allowed to continue in state legislatures and popular elections ignores the fundamental nature of the right at issue,” the Massachusetts brief states.

Even some religious groups, a driving force in keeping gay marriage illegal, are throwing their hats in the ring. A coalition of five faith-based groups, including the U.S. Conference of Catholic Bishops and the Mormon church, also filed a joint brief late late week. The coalition wants the Supreme Court to take on Utah’s case to affirm that state’s right, and thereby other states’ rights, to ban same-sex marriage.

According to the brief, the increase in lawsuits has created “legal uncertainty for religious organizations,” mainly in not wanting to perform or recognize same-sex marriages.

“Is their right to refrain from participating in, recognizing or facilitating marriages between persons of the same sex, contrary to their religious convictions, adequately shielded by the First Amendment?” the brief asks. “Only a prompt decision by this court can reduce the mounting tension surrounding such unresolved questions by removing the threat of judicially imposed same-sex marriage.”

Right now, there are at least 69 cases pending in 31 states and Puerto Rico. At least 13 of those states have had their same-sex marriage bans declared unconstitutional, but each of those decisions is on hold pending a ruling from a higher court.

Here’s a map showing what we’re looking at right now, state by state. Several of these cases are being handled jointly in federal appeals courts, including a case that started Monday.

The 9th U.S. Circuit Court of Appeals in San Francisco heard arguments Monday on gay marriage bans in Nevada, Idaho, and Hawaii. Hawaii’s legislature voted to allow same-sex marriage after a judge upheld the state’s ban, and Idaho’s governor is appealing a lower court decision that threw out its gay marriage ban.

The 9th U.S. Circuit Court of Appeals doesn’t have a deadline for its ruling, but the panel of includes the judge who issued the opinion overturning Proposition 8, according to the Associated Press. The Supreme Court meets for a private conference on Sept. 29, during which time it could decide to take up one or more of the challenges to state gay marriage bans. If they do, deliberations could start in October and a final ruling issued as early as next June or July.

Photo by Stephen Luke/Flickr (CC BY 2.0)