One of the most contentious civil rights issues in the U.S. turned into a major victory for gay rights advocates.

One of the most contentious civil rights issues in the U.S. turned into a major victory for gay rights advocates Wednesday, when the U.S. Supreme court announced at 10am ET that the Defense of Marriage Act (DOMA)—a federal law used to ban gay marriage—had been struck down as unconstitutional.

In a landmark 5-4 decision, the court ruled in United States v. Windsor that DOMA is unconstitutional as a deprivation of the equal liberty of persons that is protected by the Fifth Amendment. Conservative justices Alito, Roberts, Scalia, and Thomas dissented, with 76-year-old Justice Anthony Kennedy providing a swing vote in favor of equal protection. It was an unsurprising but still tenuous decision on the part of Justice Kennedy, who wrote the majority opinion in Lawrence v. Texas, a previous ruling on the constitutionality of state laws against sodomy.

The ruling deemed that “DOMA singles out a class of persons deemed by a State entitled to recognition and protection to enhance their own liberty.” The court also ruled that the 17-year-old law was too far-reaching and a violation of due process. In the case of Edith Windsor and Thea Spyer, the New York marriage at the center of today’s ruling, the court noted that DOMA was “a law designed to injure the same class New York seeks to protect.”

After last night’s Internet party over Wendy Davis’s filibuster, when more than 175,000 people tuned in to YouTube to watch the outcome of a 13-hour-long abortion rights standoff, it shouldn’t have been a surprise to see more than 180,000 people sitting on the U.S. Supreme Court’s blog shortly before 10pm ET. It was as if the invested Internetters had done the equivalent of a political pub crawl.

Of course, the stakes were even higher this morning as they were last night, as SCOTUS issued its long-awaited ruling on DOMA and California’s Proposition 8.

nervously awaiting #SCOTUS ruling on #DOMA expected in ten minutes… will the court stand for rights and equality today?

As news of the victory spread like wildfire across the Internet, over a hundred thousand more people joined in. On the steps of the Supreme Court building, celebration broke out.

“snuck out of work to check out the SCOTUS scene. Wooooo” via https://t.co/yJuw6cVJO4 pic.twitter.com/9Unv2DrUjR

Naturally, there was rejoicing in the form of image macros. 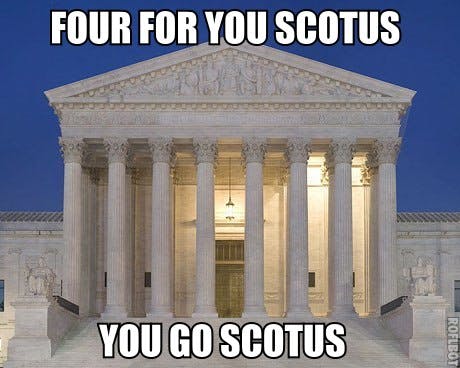 Of course, not everyone was overjoyed.

Yay Liberals, lets move on to next thing. Can we start fighting for polygamy to be recognized and constitutional? #DOMA

The ruling did not specifically mention Proposition 8, but the language of the justice’s opinions strongly suggested that it would be shortly struck down following the ruling on DOMA.

Shortly afterwards, the ruling on Prop 8, Hollingsworth v. Perry, came through: The Court dismissed its appeal.

It had been an emotional two days for Supreme Court rulings, after a hotly contested ruling on the Voting Rights Act delivered what many believed to be a crushing blow towards civil rights reform in the U.S.

So, if I understand everything coming out of SCOTUS, two black men can get married, but they might have trouble voting. #DOMA

But mostly on the Internet, the sounds of celebration drowned out the criticism and questions.

When any of my fellow Americans face legalized discrimination, this entire nation suffers. “Liberty & justice for all.” #VRA #DOMA #Prop8

Today, the wedding I’m planning with my fiancé is no longer a “wedding.” So that’s a good feeling, huh?