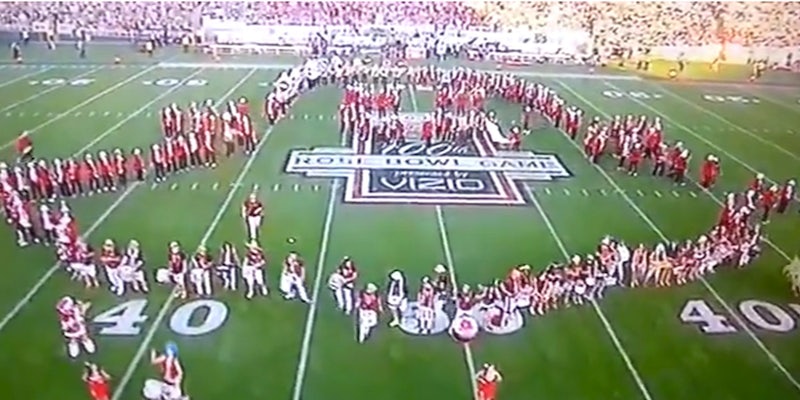 “Don’t screenshot my rusty trombone” actually means something G-rated for this crowd.

Snapchat is spending the start of 2014 dealing with a major security breach, one that affected 4.6 million users. And the disappearing photo messaging app’s two official founders, CEO Evan Spiegel and CTO Bobby Murphy, are still tussling with a former college classmate, Reggie White, who alleges Spiegel and Murphy cut him out of Snapchat. Spiegel and Murphy even filed an order of protection against White in December.

So it’s not exactly a lovey-dovey time for the Snapchat inner circle, which is why I suspect Spiegel and Murphy’s hearts grew three sizes on the day of the Rose Bowl, when Stanford’s marching band assembled their sweaty, talented bodies into a massive outline of Ghostface Chillah, Snapchat’s adorable mascot (and the only social network logo named after a member of the Wu-Tang Clan). Even if some members of Spiegel and Murphy’s old fraternity are cursing their names, the school is clearly proud that former Stanford students have made an app so big some are claiming it’s killing Facebook (it’s not, but that’s a different story, but lends itself easily to a joke about being the Ghostfacebook Killah).

As the band marched into the shape of a friendly ghost, the PA announcer cracked tech jokes, talking about something called “Secret text: the perfect blend of Snapchat and Twitter. It allows you to send messages to your friends visible for milliseconds, leaving them with only a vague idea of what you were trying to say.” Stanford’s band is known for the wackiness of its halftime shows, and after it had finished arranging itself into the Snapchat logo, it drew criticism from Michigan State fans on Twitter for making a visual joke referencing how Michigan State fans set their couches on fire one time (even though if you burn couches in response to a football game, you kind of deserve to be heartily mocked):

Both bands had decent halftime shows, not thrilled by the cheap shot Stanford’s band took at msu`s couch burning issues

Unfortunately, Ghostface Chillah is not a good luck charm for Stanford, and the team and fans may want to get all memory of the game erased. The Cardinals lost to Michigan State 24-20 in the 100th Rose Bowl. The Spartan’s tight defense was too much for Stanford.