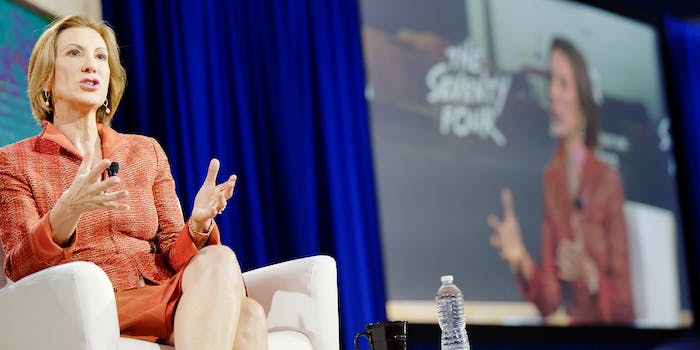 Carly Fiorina graduated college from Stanford, where she picked up degrees in medieval history and philosophy. She claims she loves her alma mater. But desperate times call for desperate measures.

Fiorina is currently polling at about 2 percent in the Iowa Republican caucus, ranking her ninth among the 13 presidential hopefuls still remaining. No matter how fond she feels about Stanford, that doesn’t mean she’s not above pandering in the hope that her poll numbers can improve in time for the first presidential primary. And pandering to a degree that’s impressive in its absolute transparency.

Love my alma mater, but rooting for a Hawkeyes win today. #RoseBowl

The Iowa Hawkeyes face Stanford in the Rose Bowl on Friday, and Fiorina, with no connection to the Iowa football team (as far as we can tell), wants the Hawkeyes to win. Or at least that’s what she’s tweeting. Gee, I wonder why that is.

As Yahoo wrote, “One of the greatest traits a sports fan can have is loyalty. It’s clear Fiorina doesn’t (publicly) have any.”

With one brilliant tweet, Carly Fiorina got everyone to remember that she was running for president. https://t.co/VCYw4I3Pl0

I just groaned so hard I may have pulled a muscle. https://t.co/R1cpGE8zGY

As per usual, we breathlessly await Donald Trump‘s take on the matter.

@realDonaldTrump Any comment on what seems to be an awfully sophisticated level of pandering by @CarlyFiorina? https://t.co/u4531WBx1A