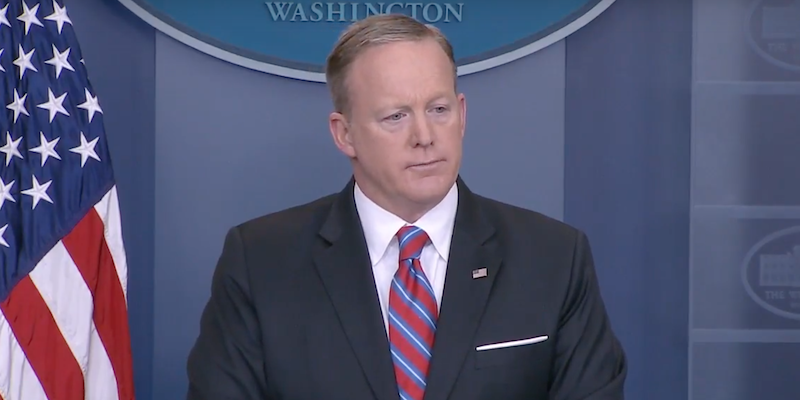 That's not what his former boss says.

Former White House Press Secretary Sean Spicer said on Thursday that the probe into Russia’s alleged interference in the 2016 election by Special Counsel Robert Mueller is not a “witch hunt,” contradicting the moniker President Donald Trump has attached to it numerous times.

When asked specifically if he though Mueller’s probe was a “witch hunt,” as Trump has referred to it, Spicer pushed back.

“As of now, I see no evidence that is it,” he said. “I think that its been going on a long time. I think there are two issues: one is… the collusion, which we’ve seen no evidence of… but with respect to the meddling, that’s another thing. You’ve seen now multiple Russians indicted by special prosecutor Mueller.

In the same interview, Spicer said he was happy that Gutherie only listed three lies he told for Trump during his time in the White House.

“But do you regret sticking your neck out for his more outlandish claims that were proven to be false?” she asked. “I’m thinking about, for example, the inauguration crowd size, the three to five million fraudulent votes during the election, having tapes of Comey in the Oval Office. I mean, those are three examples of things that are now known not to be true.”

“I appreciate you keeping it to three,” he said, adding there were things he wished he could have a “do over” on, something he has expressed since leaving the post last year.

Regardless of what his former press secretary says now, the president is unlikely to be dissuaded. The president last referred to the Mueller probe as a “witch hunt” on Monday in a tweet where he blamed it for poor relations with Russia.

You can watch Spicer’s interview over at NBCNews.