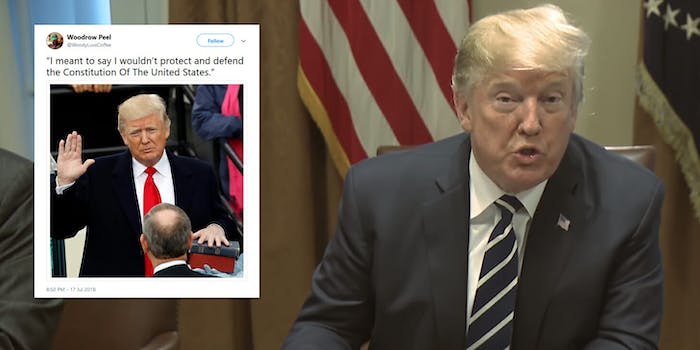 His excuse became the butt of jokes very quickly.

President Donald Trump attempted to try and rectify the torrent of criticism directed his way on Tuesday by offering an explanation for one moment of his remarks he made during a press conference with Russian President Vladimir Putin earlier this week.

The president, who refused to denounce Russia for its alleged interference during the 2016 election, said he misspoke at the conference.

Clearly, the internet isn’t buying it.

Since Trump tried to clarify his remarks, thousands of people on Twitter have mocked him by offering their own versions of the “would” versus “wouldn’t” excuse.

He meant to say, "I don't see why I wouldn't be impeached."

I misspoke. I meant to say I “wouldn’t” be right here waiting for you.

I misspoke, I meant to say I *wouldn't* try to protect your data.

Doctor: "If there are complications during surgery, do you want us to try to save your leg?

Patient Stump: "I don't see why I would."

Patient Stump: "I misspoke. I meant to say, I don't know why I wouldn't"

Doctor: "Uh…I have some bad news for you…"

“I meant to say I wouldn’t protect and defend the Constitution Of The United States.” pic.twitter.com/3vYtJGokcq

I MEANT TO SAY I *WOULDN’T* PAY YOU TO MOW THE LAWN. pic.twitter.com/yNpWprUaus

Clearly nobody is convinced Trump’s excuse was the truth.