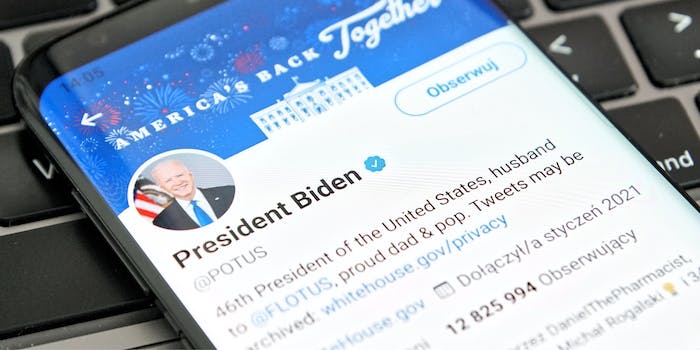 'So the stories are all just using the free tool run (analyzing 2,000 random accounts from the first 100K in Twitter's API) from Newsweek's reporter'

SparkToro, a Twitter audience research tool, is calling out journalists for reporting that half of President Joe Biden’s Twitter followers are fake or inactive accounts.

On Tuesday, Newsweek published an article claiming to have used the SparkToro tool on the president’s official @POTUS Twitter account and found that 49.3% of his followers were inactive or fake accounts.

The news created a storm, traveling through right-wing circles and up to the person who’s considering buying Twitter outright. Conservative commentators were quick to use the news to call into question the integrity of the 2020 election, and Elon Musk responded to the Newsweek report as part of his campaign against bots on Twitter.

However, Rand Fiskin, co-founder of SparkToro, said the Newsweek story—and the subsequent coverage by other organizations—are inaccurate.

According to Fishkin, the free version of SparkToro uses a random selection of the latest 100,000 followers of an account, then runs a series of tests to determine if the accounts are fake.

“So the stories are all just using the free tool run (analyzing 2,000 random accounts from the first 100K in Twitter’s API) from Newsweek’s report,” Fiskin said. “This is useful to see if an account recently acquired many fake followers. But less so for a full accounting.”

Fishkin also said that many large accounts have inactive followers.

“Large accounts tend to attract a lot of bots, inactives, fake, spam, etc. There’s nothing to suggest the account holders are somehow responsible for this,” Fiskin said.

The numbers by Newsweek, though, even though they may be high, don’t appear to be far off from SparkToro’s assessment of Biden’s personal account.

Conservatives on Twitter were quick to run with the narrative that half of Biden’s followers were fake and used the story to further question the integrity of the 2020 election.

“If according to a report about 1/2 of Joe Biden’s Twitter followers are fake, what’s the over/under on his 81 million voters?” one user wrote.

“Looks like Brandon is running just under 50% ‘fake followers’,” another wrote. “Fake election, fake groupies, fake presidency. No wonder he gets so pissy when a Trump Rally shows more living, breathing people in the crowd than most replies @potus ever gets.”

On his Truth Social page, Eric Trump Jr. compared his father’s Twitter followers to Biden’s, called into question the validity of the 2020 election, and said “not even Democrats believe this crap. Our country is in some serious trouble…” with an attached screenshot of a Breitbart post citing the Newsweek audit.

Musk, who announced last week that his acquisition of Twitter was on hold, mentioned the Newsweek audit, potentially as even more of a reason to potentially back out of the deal. Musk recently got into a spat with current Twitter CEO Parag Agrawal over claims that less than 5% of Twitter accounts were fraudulent or inactive, something Musk disputes.

Musk said last month that he would “authenticate all real humans” if he acquired the platform, something some privacy advocates have taken issue with. Musk has claimed that 20% of Twitter users are fake or inactive, but it’s unclear how he arrived at that number. He called the Newsweek piece “interesting.”

In a thread on Monday, Agrawal said Twitter’s bot detection system is solid.

“We suspend over half a million spam accounts every day, usually before any of you even see them on Twitter,” he said in a thirteen-tweet thread. “We also lock millions of accounts each week that we suspect may be spam, if they can’t pass human verification challenges (captchas, phone verification, etc)”

Musk claimed that his $44 billion takeover of the popular social media app is on hold because of the fake accounts issue, but many speculate it could be because of tanking Tesla stock. Analysts think Musk could be angling to renegotiate the sale for less money.

Newsweek’s Darragh Roche, who wrote the story, was not able to immediately respond to the Daily Dot’s inquiry.