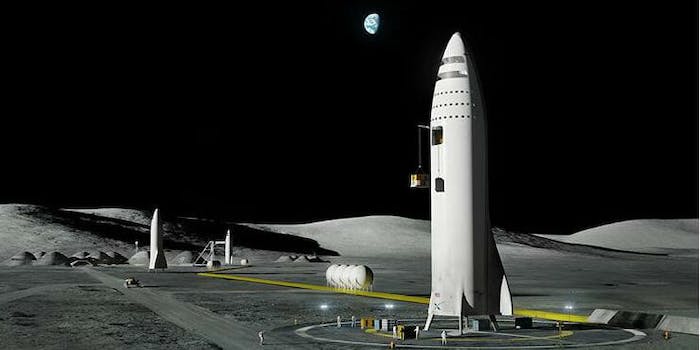 SpaceX will build its Big F**king Rocket at the Port of L.A.

The massive spacecraft is scheduled for Mars in 2024.

SpaceX’s Big Fucking Rocket is going to Hollywood before its trip to Mars.

Officially announcing that @SpaceX will start production development of the Big Falcon Rocket 🚀 in the @PortofLA!

This vehicle holds the promise of taking humanity deeper into the cosmos than ever before. #SOTC2018 pic.twitter.com/2TtGy9NERX

“This vehicle holds the promise of taking humanity deeper into the cosmos than ever before,” Garcetti added.

The announcement appears to confirm previously released documents that describe SpaceX’s 30-year lease to build a “state-of-the-art” manufacturing facility on an 18-acre site at Berth 240, an abandoned lot on the San Pedro side of the port. For comparison, SpaceX’s current manufacturing site in Hawthorne, California, where it builds Falcon 9 and Falcon Heavy rockets, takes up 10 to 15 acres of real estate.

“SpaceX has called the Port of Los Angeles home to our West Coast recovery operations since 2012, and we truly appreciate the City of Los Angeles’ continued partnership,” Gwynne Shotwell, president of SpaceX, said in a statement. “As announced today by Mayor Garcetti, the Port will play an increasingly important role in our mission to help make humanity multi-planetary as SpaceX begins production development of BFR—our next generation rocket and spaceship system capable of carrying crew and cargo to the Moon, Mars, and beyond.”

According to Ars Technica, SpaceX has already begun moving components to the new site, including a tool used for making carbon fiber composites of its upper stage. It’s important the spacecraft is built near water given its immense size. Rather than carefully hauling the rocket with a crane, it can simply be loaded onto a barge and ferried off to test sites in other parts of the U.S., like Florida or Texas.

The BFR (Big Fucking Rocket or Big Falcon Rocket depending on your audience), is the key for Musk to reach his goal of colonizing Mars. Speaking at the International Astronomical Congress in Australia earlier this year, Musk explained he wants to cannibalize every other SpaceX rocket—the Falcon 9, Falcon Heavy, and Dragon—and use the resulting resources to create one giant spacecraft model.

The 106-meter long behemoth (48 meters without the booster) will be unlike other spacecraft before it. It will be capable of holding more payload than any other rocket, including the Saturn V. Like other SpaceX rockets, the BFR will be fully reusable, which should help reduce its estimated $90 million cost per launch.

The BFR’s primary mission is to send people to Mars by 2024 so a colony can be established within the next 100 years. It will also be used to send people to the moon, launch satellites into low Earth orbit, and transport passengers around Earth at record speeds.