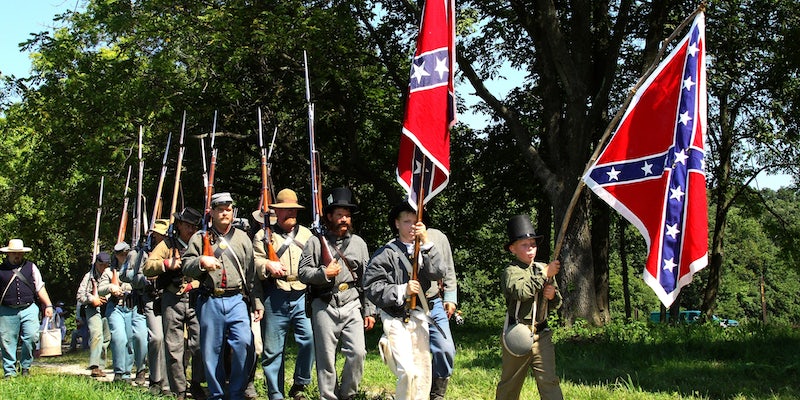 Mounting public pressure appears to have changed her mind.

Facing new pressure to expunge a symbol of slavery and racial oppression from the capitol of the state that started the Civil War, South Carolina Gov. Nikki Haley (R) on Monday called for the state legislature to take down the Confederate flag flying near the statehouse.

“It’s time to move the flag from the capitol grounds,” Haley said, as many of the state’s top politicians stood behind her and cheered.

“For good and for bad, whether it is on the statehouse grounds or in a museum, the flag will always be a part of the soil of South Carolina,” the governor continued. “But this is a moment in which we can say that that flag … does not represent the future of our great state.”

“For good and for bad, whether it is on the statehouse grounds or in a museum, the flag will always be a part of the soil of South Carolina.”

The removal of the flag, which has flown in the state capitol of Columbia for more than 50 years, requires a two-thirds vote of the South Carolina General Assembly as a result of a compromise enacted 15 years ago. Haley said that if the General Assembly did not vote on the flag’s removal before the end of its session, she would use her “extraordinary circumstances” authority to call the legislature back into session.

Sen. Lindsey Graham (R-S.C.), a 2016 presidential candidate, joined Haley for her statement and supported her call for removal, reversing his earlier support for the flag. Sen. Tim Scott (R-S.C.), the state’s first black senator and the first black Republican elected to Congress in the South since 1897, stood behind Haley and supported her call for the flag to be removed.

In a sign that the Republican Party is scrambling to improve its image among black voters, Reince Priebus, the chairman of the Republican National Committee, stood among many South Carolina lawmakers of both parties during Haley’s speech, including Rep. Jim Clyburn (D-S.C.), the third-ranking House Democrat.

“We have changed through the times,” Haley said in her statement. “But that does not mean that we forget our history.”

The campaign to get rid of the nation’s most famous symbol of secession and slavery has intensified in recent days, following the racially motivated shooting last Wednesday that killed nine people at Charleston‘s Emanuel AME Church.

Emanuel AME is the oldest black church in the South. The accused shooter, Dylann Roof, told authorities that he was trying to start a race war. Photos of him on a website dedicated to his white-supremacist views showed him posing with the Confederate flag and a handgun. One of the people he killed was the church’s senior pastor, South Carolina state Sen. Clementa Pinckney. Federal, state, and local authorities are treating the shooting as a hate crime.

Roof has been charged with nine counts of murder and criminal possession of a weapon.

Like many issues related to America’s long history of racial oppression, the Confederate flag’s presence in Columbia sharply divides whites and blacks. A November 2014 Winthrop University poll found that 61 percent of South Carolinians wanted the flag to say where it was, while 33 percent wanted it removed. But 73 percent of whites wanted it to stay, and 61 percent of blacks wanted it to go.

“The fact that it causes pain to so many is enough to move it from the capitol grounds,” Haley said during her statement.

The Confederate battle flag was placed on the capitol dome in 1962 to signal the state’s opposition to the civil-rights movement, but in 2000, as a compromise measure to head off more drastic action, it was moved a short distance to a new Confederate Monument that sits nearby.

Gov. Haley’s call to take down the flag marked a sharp reversal of her previous statements on the issue. On Friday, less than two days after the shooting, Haley said she wanted her state to have “have [a] conversation [and] allow some thoughtful words to be exchanged,” but she declined to say whether she personally supported the flag’s removal.

Last October, Haley was more forceful in her support of the flag, saying she didn’t see any evidence that it was harming her state.

“Over the last three and a half years,” she said during a gubernatorial debate, “I spent a lot of my days on the phones with CEOs and recruiting jobs to this state. I can honestly say I have not had one conversation with a single CEO about the Confederate flag.”