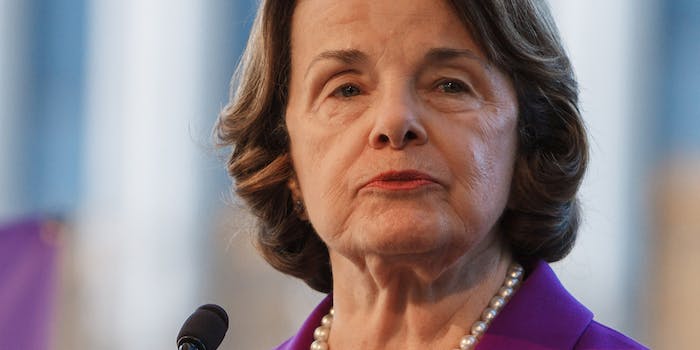 The requirement failed as an attachment to a previous bill, but now it's back.

Dianne Feinstein, the top Democrat on the Senate Intelligence Committee, is trying again to force social-media companies to report potential terrorist activity to the government.

Feinstein, California’s senior senator and a longtime surveillance hawk, previously tried to include the requirement in the intelligence community’s 2016 budget authorization, but she was forced to remove it after it faced broad opposition from technology companies and civil-liberties groups like the American Civil Liberties Union. Feinstein’s provision threatened to sink the entire bill, a spokesperson told The Hill in September.

Now, that provision—which the ACLU said would “harm minorities and chill speech”—is back in standalone form. After the terrorist attacks in Paris and San Bernardino, Feinstein said, it was imperative that social-media sites do a better job of policing extremist content and reporting terrorist activity to the authorities.

“I think there is great pressure on Congress to want to do something in the wake of these recent attacks,” Michael W. Macleod-Ball, the chief of staff in the ACLU’s Washington office, told the Daily Dot. “And you’ve seen this in the efforts to restrict entry of refugees, you’ve seen it with the visa waiver provision bill that passed the House yesterday. There’s just a great hue and cry for Congress to do something. But that doesn’t mean that solutions that are deemed either inappropriate or ineffectual previously are are any more effective now just because some tragedies have happened.”

Feinstein’s bill, the Requiring Reporting of Online Terrorist Activity Act, only vaguely defines what companies would have to report. The bill does not require the companies to actively seek out terrorist threats or extremist content on their sites. But when such content is brought to their attention, they would have to report it or face legal consequences.

The bill could result in “the social media companies quietly making a proactive effort not to look at this stuff,” Macleod-Ball said.

There are also fears that this bill could do the reverse, and technology companies could over report anything on their platforms that relates to terrorism. “[Social media companies] could also go overboard in trying to make sure they cover truly terrorist activities but anything that might smack of any connection to terrorism and there are plenty of legitimate conversations that go on online that connect to that topic,” Macleod-Ball said.

“Whoever, while engaged in providing an electronic communication service or a remote computing service to the public through a facility or means of interstate or foreign commerce, obtains actual knowledge of any terrorist activity … shall, as soon as reasonably possible, provide to the appropriate authorities the facts or circumstances of the alleged terrorist activities,” the bill says.

Sen. Ron Wyden (D-Ore.), a leading privacy advocate on the Intelligence Committee member, quickly denounced the bill in a statement.

“I’m opposed to this proposal because I believe it will undermine that collaboration and lead to less reporting of terrorist activity, not more,” Wyden said. “It would create a perverse incentive for companies to avoid looking for terrorist content on their own networks, because if they saw something and failed to report it they would be breaking the law, but if they stuck their heads in the sand and avoided looking for terrorist content they would be absolved of responsibility.”

The Internet Association, which represents many of the companies that the bill would cover, also criticized it.

“This proposal creates a vague and unworkable standard for reporting and a massive new liability regime that could chill free speech and innovation online, without any appreciable national security benefits,” Michael Beckerman, the group’s president, said in a statement. “The legislation incentivizes Internet platforms to over report, even poor quality information, to authorities, making it more difficult to find credible threats.”

Twitter, one of the most popular online destinations for terrorist recruitment, declined to comment specifically on the bill. A spokesman told the Daily Dot that “violent threats and the promotion of terrorism deserve no place on Twitter and our rules make that clear.”

Nothing in this section may be construed to require the provider of an electronic communication service or of a remote computing 20 service—  (1) to monitor any user, subscriber, or customer of that provider; or (2) to monitor the content of any communication of any person described in paragraph (1).

Tom Mentzer, a Feinstein spokesman, told the Daily Dot that the bill had bipartisan support.

“The bill calls on the [attorney general] to set up a process,” Mentzer said. “I’m confident they have the ability to work out a solution. As I said, the same process happens with child pornography. There’s no silver bullet solution. This is one tool of many to help turn the tide.”

Even so, free speech advocates aren’t sold. “[The bill is] broad. Another word would be that it’s ‘ambiguous,'” Macleod-Ball said. “If you’re imposing this mandate on the social media companies and you’re not exactly defining what you expect them to do, then you run this risk of being over inclusive or under inclusive in the results.”