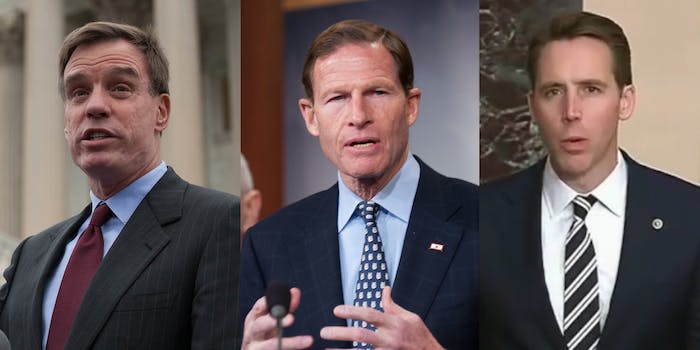 The bill would target companies with more than 100 million active monthly users in the U.S.

A bipartisan trio of senators will introduce a bill that will allow for social media users to make their data portable by requiring social media companies to give consumers a way to make it easy to move it to another platform.

The ACCESS Act would set guidelines for social media platforms with more than 100 million active monthly users in the United States. It would essentially require major social media platforms to have an easily available option for people to move their data to “a user, or to a competing communications provider acting at the direction of a user, in a structured, commonly used, and machine-readable format.”

It would also allow users to designate a “custodial third party” to manage their “online interactions, content, and account settings” on the large platforms impacted by the bill.

“Social media has enormous benefits. But, as we’ve seen, the tremendous dominance of a handful of large platforms also has major downsides—including few options for consumers who want to use social media to connect with friends, store their photos or just watch cat videos, but who face a marketplace with just a few major players and little in the way of real competition,” Warner said in a statement.

Blumenthal said the bill would allow for “meaningful competition” among tech giants.

“As we learned in the Microsoft antitrust case, interoperability and portability are powerful tools to restrain anti-competitive behaviors and promote innovative new companies. The bipartisan ACCESS Act would empower consumers to finally stand up to Big Tech and move their data to services that respect their rights,” the Connecticut senator said in a statement.

Hawley said that the bill would give more control to users over the data that is collected on the platforms.

“Your data is your property. Period. Consumers should have the flexibility to choose new online platforms without artificial barriers to entry,” Hawley said in a statement.

In June, Warner and Hawley teamed up to introduce the DASHBOARD Act, a bill that would require tech companies to tell users how much the data collected on them was worth.