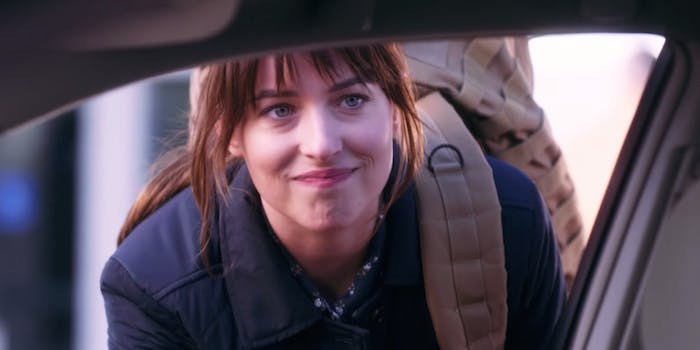 ‘SNL’ struck a nerve with this ISIS recruitment ad sketch

The parody of a Super Bowl ad has people divided.

As amazing as it sounds, Fifty Shades of Grey wasn’t the most controversial part of Dakota Johnson‘s stint hosting Saturday Night Live this weekend.

No, the most polarizing sketch in the show was a disturbing spoof of Toyota’s “My Bold Dad” Super Bowl ad.

In the sketch, Taran Killam plays an emotional dad dropping his daughter (Johnson) off at the airport, where she’s set to head off on a life-changing journey. But Johnson isn’t going to school abroad or joining the Army. She’s joining a group of a much different caliber.

Has SNL gone too far with a sketch lampooning ISIS? Some viewers thought so.

Dear #SNL, jokes about Isis are not funny. See how much you laugh when you have to see your loved one(s) being slaughtered. No respect.

I'm going to go ahead and voice my opinion on the #SNL ISIS skit. Absolutely hell no, under any circumstance. Poor poor taste!

3 young girls are somewhere in Syria tonight because they got mesmerised by ISIS, family is sick with worry and you do this? #SNL #shame

#SNL is gonna catch a ton of heat for that ISIS sketch. I'm an SNL fan, but idk about that one. May be a bit soon

To these and other viewers, SNL was making light of a terrorist organization that has killed prisoners, convinced young girls to run away to become brides, and led people to risk everything (and break the law) by trying to join them. ISIS is now even threatening Twitter founder Jack Dorsey for suspending ISIS-related Twitter accounts.

On the other hand, SNL (like Japan) was openly mocking ISIS and in turn undermining the group’s message. It’s probably one of the more scathing sketches SNL has done in recent memory, and some people simply found it to be hilarious.

Seeing #SNL took some shots at ISIS tonight. About time somebody did.

Seriously? SNL is being criticized for mocking Isis, and the people who join it? There's no group more deserving of ridicule. Thumbs up #SNL

People are honestly offended by the ISIS #SNL sketch? If you've been a long time fan & you're not familiar with satire – turn off your tv.

Everybody upset about #SNL and #ISIS: seriously, do you not remember all the Al Qaeda / Bin Laden skits? This is NOTHING.

SNL isn’t apologizing for the sketch; it’s still on YouTube, where it has been viewed more than 560,000 times. Based on the like-to-dislike ratio, the satire defense seems to be winning the debate.