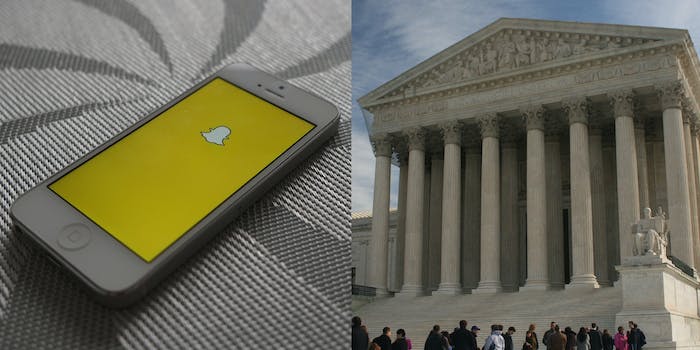 The court ruled 8-1 in favor of the student.

The Supreme Court on Wednesday ruled that a Pennsylvania school district violated the constitutional rights of a student when they punished her for sending vulgar Snapchat messages away from the school grounds.

The court ruled 8-1 in favor of the student, with Justice Clarence Thomas being the lone dissenter.

The student, whose name is Brandi Levy and is referred to as “B.L.” in the Supreme Court’s decision, failed to make the varsity cheerleading squad for the Mahanoy Area School District and posted two images on Snapchat where she “expressed frustration with the school and the school’s cheerleading squad.” One of the posts contained “vulgar language and gestures.” She made the posts at a local convenience store.

The first image said: “Fuck school fuck softball fuck cheer fuck everything.” The second Snapchat image said: “Love how me and [another student] get told we need a year of jv before we make varsity but tha[t] doesn’t matter to anyone else?”

The school district, after becoming aware of the posts, suspended her from the junior varsity cheerleading squad for the upcoming year. In response, Levy and her parents sued the school district.

In their decision, the Supreme Court said that the school violated her First Amendment rights when they suspended her over the Snapchat posts that were made off of school grounds.

“The circumstances of B. L.’s speech diminish the school’s interest in regulation. B. L.’s posts appeared outside of school hours from a location outside the school,” the Supreme Court’s decision reads. “She did not identify the school in her posts or target any member of the school community with vulgar or abusive language. B. L. also transmitted her speech through a personal cellphone, to an audience consisting of her private circle of Snap-chat friends.”

You can read all of the Supreme Court’s decision here.