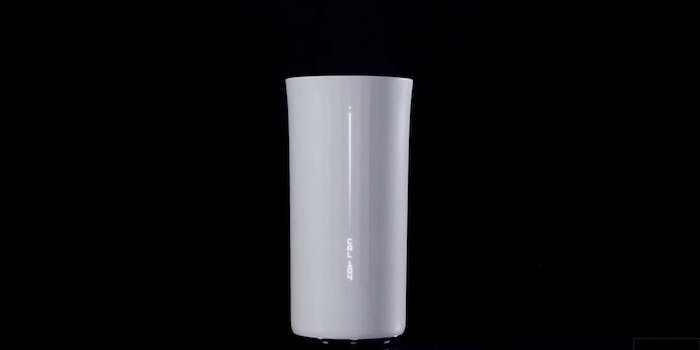 Vessyl: A smart cup that knows everything about what you’re drinking

How many calories are in that pina colada smoothie? You probably don't wanna know.

Haven’t you always wanted a $199 smart cup that told you how many calories were in the beverage you were consuming? Oh, you haven’t? That’s not a thing that people actually want, you say? Well, the makers of Vessyl, a new portable smart cup that analyzes your beverage’s nutritional content, beg to differ.

According to the above Vessyl promo video, which depicts well-manicured white people engaging in various levels of physical activity while imbibing beverages, the smart cup uses internal sensors to break down the nutritional content of whatever you’re drinking.

A digital display on the surface of the cup shows you the caffeine, fat, protein, and caloric content of your beverage, among other things; to activate the display, you pick up the cup and tilt it away from you. The cup also tracks how much water you consume and lets you know how hydrated you are throughout the day. It then links to your smartphone via Bluetooth, as well as to various popular fitness-tracking devices.

Created by the health and lifestyle startup Mark One, Vessyl has allegedly been seven years in the making, and it shows: The product is sleek and well-designed, and some of its capabilities, such as its ability to differentiate between similar beverages like Coke and Pepsi by evaluating their sugar content, are impressive.

What’s not so impressive is the price: Although it’s now available for preorder for $99, it’ll eventually sell for $199 when it’s released on the mass market in early 2015. Even in the midst of this seemingly never-ending fitness tracker craze, consumers might not think it’s worth shelling out two hundo for a smart cup that can tell the difference between Faygo and Fanta.