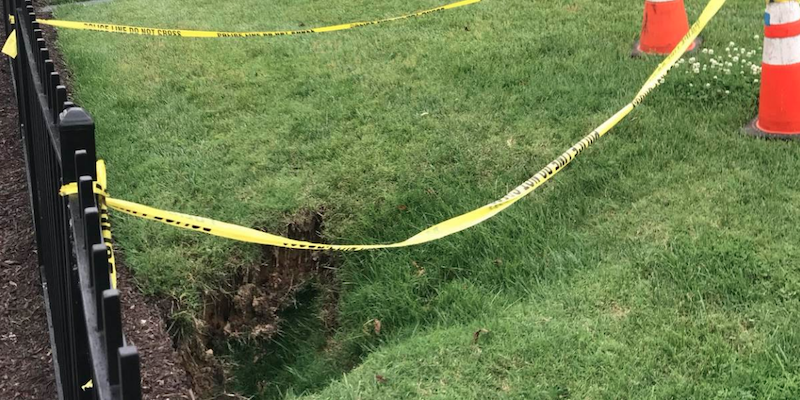 'Melania's escape tunnel has caved in.'

A sinkhole appeared on the White House front lawn on Monday and, much to the internet’s amusement, it appears to be growing.

The collapse, which occurred near the press briefing room, was roped off by groundskeepers. It was first noticed this week by Voice of America reporter Steve Herman who tweeted a picture and an update that a second sinkhole is opening up right next to the first one.

This week I’ve been observing a sinkhole on the @WhiteHouse North Lawn, just outside the press briefing room, growing larger by the day. pic.twitter.com/BsFUtxFqpB

Washington D.C. is, of course, built on swampland. More than just a useful satirical device, however, it means that large areas within the city are susceptible to what is known geologically as a “forebulge collapse”. Researchers believe the entire city will sink six or more inches within the next century.

For Twitter users, on the political left and right alike, the sinkhole was too perfect a metaphor to pass up.

Given President Donald Trump’s loathing for the “corrupt” mainstream media, some pointed to the sinkhole’s proximity to the press briefing room.

It's not like a growing sinkhole right outside the press briefing room at the White House has any existential meaning to it at all, right?

How appropriate is it that the sinkhole is opening near the press briefing room?https://t.co/NRJVKuzcR1

For others, however, it was quite simply a metaphor for the Trump administration.

An actual, literal sinkhole has opened on the White House lawn outside the briefing room on the north side. Even the earth is trolling Trump and I'm here for it

Melania's escape tunnel has caved in.

As for the sinkhole, it’s just excited to be here.

I’m so excited to be part of this administration and I’d like to suck in as many people as I can. Where should I start? #sinkholes

And it has big dreams…

Famous #sinkholes in history. I aspire to be like these sinkholes someday. @realDonaldTrump pic.twitter.com/9a7Pt4cGL9