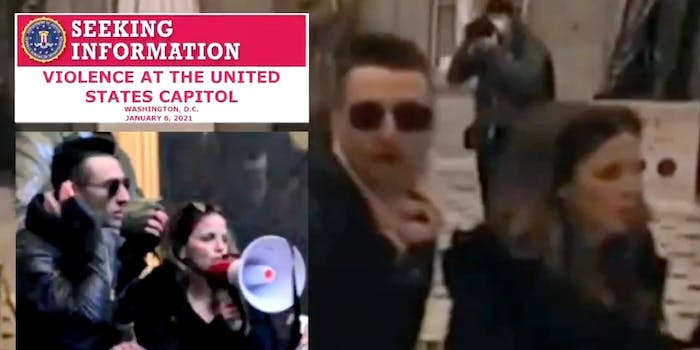 Twitter users are calling on the FBI to arrest a far-right doctor who was seen at the Capitol during last week’s insurrection.

Dr. Simone Gold, who first made headlines in July for participating in an anti-lockdown protest alongside other physicians outside of the Supreme Court, found herself on an FBI wanted poster after being pictured among other rioters.

Since Wednesday’s uprising, which resulted in the death of five people, huge swathes of internet users have collectively begun an open-source investigation to identify those involved at the Capitol. And with countless videos, high-definition pictures, and open boasting across social media from anti-maskers at the riot, arrests have been piling up.

Gold was initially identified last week after users saw she was being sought by federal law enforcement.

Gold, who also pushed the unproven claim that the anti-malaria drug hydroxychloroquine was a cure for COVID-19, has since admitted to being at the Capitol in a statement to the Washington Post.

But Gold has denied any wrongdoing and claimed that those around her had remained entirely peaceful while illegally breaching the Capitol.

“I can certainly speak to the place that I was, and it most emphatically was not a riot,” she said. “Where I was, was incredibly peaceful.”

Gold claims that she now regrets entering the Capitol and that she has not yet been contacted by law enforcement. While the FBI will almost certainly reach out to Gold, Twitter users are doing everything they can to speed up the process. Gold’s Twitter account, which remains active, is being bombarded by users tagging the FBI.

While Gold remains free, other prominent figures who attended the riot haven’t been so lucky. Jacob Chansley, the man known as the “Q Shaman,” was arrested last week, as well as several others who became infamous for their involvement.