New service lets you buy sad, abandoned startups for as low as $10

Honestly, how far can one really take a concept like “Grindr meets Quora, but for dogs”?

In the creation of the next great world-changing startup, there are a lot of spots where the whole endeavor can run off the rails. Most die immediately after the “ideas” phase—honestly, how far can one really take a concept like “Grindr meets Quora, but for dogs”?—whereas others get a whole bunch of venture funding, hire dozens of employees, experience a brief flash of popularity, and then quickly fall into the same memory hole where the Pets.com sock puppet has spent the last decade and a half plotting revenge.

So what about the ideas that run out of gas somewhere in the middle of those two extremes? The ones where a programmer started banging out the code for his or her brilliant innovation but then, somewhere along the way, lost the requisite passion required to make your dog-geared Q&A app a profitable reality.

Here’s where SideProjectors.com comes in. 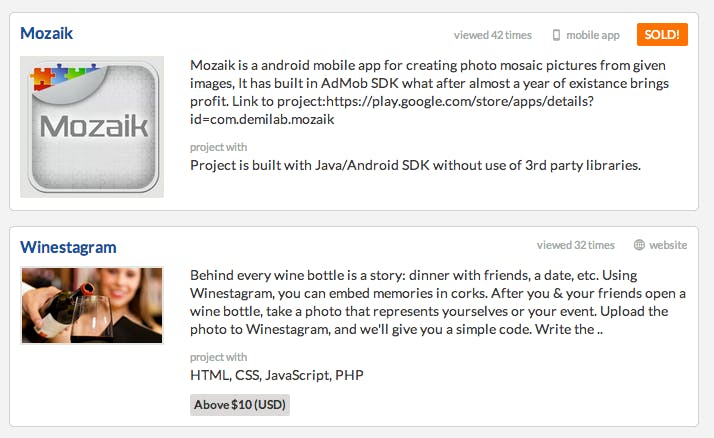 Created by Sydney, Australia–based Web designer Eric Bae, SideProjectors is a free-to-use marketplace where people can buy and sell half-finished startups. “Almost all… software engineers and entrepreneurs have their own little ‘side projects,’” wrote Bae in an email. “They have the creative skill (i.e. programming) to make their own websites, mobile apps, or games… [but] unfortunately, many of these interesting side projects often get abandoned due to a variety of reasons.”

It’s a bummer “because the time and effort you have spent on your side project seem to be wasted,” he added.

While Bae had been carrying around the idea for SideProjectors in his back pocket for a while, it only became a reality when he created at the Hackagong hackathon in Sydney earlier this year.

In addition to people looking to hand off their pet projects entirely, the site also lets budding entrepreneurs just looking for a little help connect with people who could serve as potential cofounders.

Some of the projects currently posted on the site could likely be purchased with the cash currently burning a hole in your wallet this very second. For example, Winestragram, which allows you to match bottles of wine with photos of the people with whom you drank it, and ShelfProud, a social network for book collectors, are both going for bargain-basement price of $10. On the other end of the spectrum, there are projects like SadPanda, a simple image-uploading site already receiving a quarter-million page views a month, has an asking price of $10,000.

“Since launching two weeks ago, we have had almost 80 projects posted and five projects have been sold successfully, with about 20 other projects under negotiations between the buyer and the seller,” Bae explained, noting that the site is still too new to have produced any success stories. “We are yet to realise what people have done with their newly purchased projects… but I’ll be surely following the progress.”